Warren Buffett is no longer the second richest person in the world: Meet his successor, Amancio Ortega 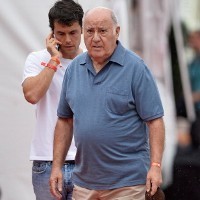 He’s now the second richest person in the world but most people have never heard of Amancio Ortega.

Ortega is the founder of Inditex SA, the world’s largest clothing retailer and parent company of fast-fashion chain Zara. And according to the latest update to the Bloomberg Billionaire’s Index, released this week, he is now wealthier than investment guru Warren Buffett.

Bloomberg estimates Ortega’s net worth to be $US71.5 billion ($92.7 billion), a 17% increase compared to last year driven by Inditex’s surging sales and profit levels.

Ortega’s fortune puts him ahead of Buffett, who is estimated to be worth $US70.2 billion ($91 billion), and behind Microsoft co-founder Bill Gates who still holds the mantle of the world’s richest person. Bloomberg estimated Gates’ wealth to be $US85.5 billion ($110 billion).

Ortega is an intensely private person but here are five things you probably didn’t know about the 79-year-old Spanish retail king.

While Zara has been a relatively new entrant to the Australian retail scene, the fashion chain is celebrating its 40th anniversary this year.

According to Forbes, Ortega founded Zara with his first wife Rosalia Mera in 1975 by making bathrobes in their living room. By the mid-1980s, there were numerous Zara stores across Spain and the brand began expanding internationally.

More than 2000 Zara stores are now in 88 countries and Ortega is renowned for building a retail chain that uses limited advertising, expands aggressively and controls most of its own supply chain.

2. Zara’s not the only brand in his stable

Zara’s parent company Inditex owns a stable of clothing and homewares brands, although you won’t find most of them in Australia.

Pull & Bear is a youth-focused clothing chain that is a common sight along shopping strips in Spain, while Bershka is tailored to women’s clothing and accessories.

Other brands in the Inditex group include Massimo Dutti, Stradivarius, Oysho, Uterque and Zara Home, which arrived in Australia in 2014.

Until 1999, the world’s media did not even know what Ortega looked like, with no photograph of him ever published. This changed in 2000 when he made a public appearance in the lead up to Inditex’s initial public offering.

But even with the attention of the IPO, Business Insider reports Ortega has still only ever given three media interviews.

4. Ortega buys his coffee and breakfast at the same place every day – and wears the same outfit

Ortega appreciates routine and, according to Business Insider, dines in the same cafeteria each morning.

And not one for expensive business suits, Ortega spent years wearing the same outfit to work every day: a blue blazer, white shirt and grey pants. Surprisingly, the clothes are not from Zara.

5. He weathered the financial crisis

Like many European countries, the Spanish economy suffered greatly through the global financial crisis.

But Inditex defied the rest of the market by continuing to make significant gains between 2009 and 2014. In turn, Forbes reports Ortega’s wealth grew by $US45 billion during those five years.