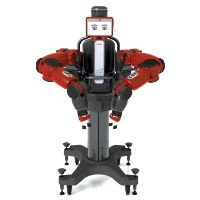 Haigh’s Chocolates, the family-owned chocolate business that turns 100 this year, will have a new employee to welcome into the fold in the coming months, but this little guy is a bit different to the other staff who’ve walked the halls of the iconic South Australian confectionery manufacturer.

Baxter the robot, a ‘collaborative robot’ designed to work safely alongside people, will make his debut at Haigh’s Adelaide factory just after the chocolatier’s busy Easter period and is touted to revolutionise Australia’s manufacturing industry.

Baxter will be integrated to the daily life of the Haigh’s factory, easily moving around the floor without safety cages. He can be programmed to perform a range of simple, repetitive tasks quickly and efficiently.

Alister Haigh, joint managing director and great-grandson of founder Alfred Haigh, told SmartCompany the innovative solution is the next step in modern manufacturing.

“I think when manufacturers in general see Baxter in operation, they’ll be amazed,” Haigh says.

“This is just the way forward: A new generation of robots simple for manufacturers.”

Baxter was created by Adelaide-born Rodney Brooks in 2012 and is being distributed through Australia by automation and control services company SAGE Automation, which plans to expand the robot’s use in Australia’s manufacturing industry.

A position at Haigh’s will be the robot’s first industrial implementation in Australia, achieved by a successful application for funding through the South Australian government for innovation in manufacturing.

“Baxter will just make life easier for the workforce, taking on menial repetitive tasks, so our staff can focus on the skilled tasks required for making handmade products,” he says.

But this is not a robot revolution, says Haigh, who confirmed Baxter would not replace any staff positions with the company.

“Baxter will make it easier for us to continue to grow and expand,” says Haigh.

“I actually think our staff will have lots of fun teaching him new tricks,” he says.