Banks are awash with funds and we have record low interest rates, so why aren’t SMEs borrowing?

According to the Reserve Bank of Australia (RBA), lending to SMEs remains flat, and demand for SME credit is subdued.

This is despite record low interest rates, which the RBA says it won’t be looking to increase until 2024.

So why aren’t banks lending? Why aren’t small businesses taking advantage of record low rates? And will this change in 2021?

1. SMEs are cashed up and don’t need the funds (just yet).

Many have been able to build a liquidity buffer by taking advantage of loan payment deferral initiatives and also drawing down on credit limits.

A recent ABS survey revealed that 35% of small businesses reported they had enough cash for at least six months.

2. They’re uncertain about the future.

Businesses impacted by the pandemic, particularly those which can be severely affected by on-going shutdowns and border closures, remain understandably reluctant to take on more debt.

3. They’d like to borrow but getting approved has been difficult.

Banks have become extra cautious about lending especially in sectors such as retail and tourism as well as to customers from other banks.

The changed circumstances have also led to blowouts in decision-making turnaround times. 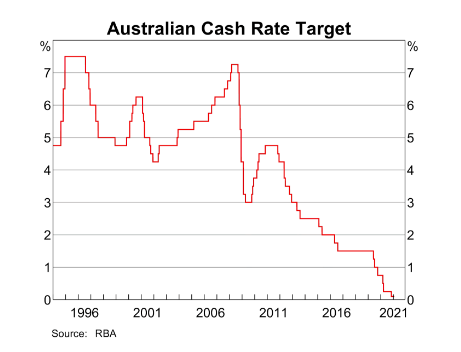 If you can get debt, it will be at the lowest rates in decades, plus these rates are likely to be with us for at least the next three years.

If you have previously been knocked back or have not even tried, now might be a good time to re-assess. Banks want and need to lend to the SME sector which provides solid returns and a spread of risk.

Plus, the government is making it easier for them. The $200 billion Term Funding Facility gives banks access to funds at 0.10% and the $40 billion Coronavirus SME Guarantee Scheme sees taxpayers share 50% of the risk of loans made to SMEs.

These programs, combined with the billions of even lower-cost deposits from business and personal customers, mean the banks have plenty of cheap money to lend.

But governments and regulators cannot force banks to lend although they can and should ensure that genuine competition exists.

Similarly, small businesses cannot be forced to borrow but governments can and should implement policies which give them the confidence to do so.

Viable small businesses unable to access debt are encouraged to explore all funding options including smaller bank and non-bank lenders, grants and programs such as the Australian Business Growth Fund.

Judo Bank has doubled in size in the last 12 months and aims to continue this momentum although it does not lend sums less than $250,000.

Several of the fintech lenders are now offering a broad range of products, longer terms and as they develop more of a track record, they are able to reduce their cost of funds and therefore offer lower pricing.

And global finance giant American Express has just announced it will soon enter this market.

These lenders are especially well suited to business owners who do not have or are not able to offer property as security and/or need a prompt decision and access to funds.

Small business ombudsman Kate Carnell is calling for a government-funded loan scheme where repayments are based on turnover and the interest rate is capped at a percentage of the small business’ annual revenue.

The scheme would work like HECS loans and allow businesses to access credit without having to pay it back until turnover had reached a designated level.

But any program involving government lending taxpayers’ money is fraught, would take time to implement and would be challenging to administer.

Despite a surge in the number of Australians buying their first home, research shows this trend will be short term

In July 2020, the number of home loans provided to first-home buyers exceeded 10,000 for the first time in 10 years. But this trend will be short term.

Banks aren’t offering unsecured finance to SMEs. Not in a covid economy.

25% of the national workforce is a unemployed, underemployed, or “jobkeepered”. When the government stops dumping 7% of GDP into welfare payments to small businesses in March we’ll see the real fun start.