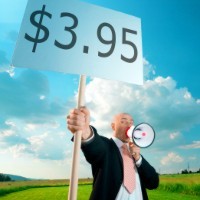 Among the 52 recommendations contained in the draft report on Competition Policy from economist Ian Harper, is a suggestion price signalling laws established in 2011 be repealed.

These laws currently make it unlawful for banks to disclose price-related information in a broad range of circumstances.

Price signalling laws in Australia have an almost comical, and highly political, history. Their genesis was the Australian Competition and Consumer Commission’s defeat in a number of high profile petrol price fixing cases. This led to calls to expand the scope of the existing price fixing provision to capture a broader range of “concerted practices”.

The previous price fixing provision required proof of a “contract, arrangement or understanding”, interpreted as necessitating some form of “commitment” by parties to act in a particular way. In particular, merely giving or receiving information was not considered enough to satisfy the requirement. A review into the meaning of understanding was promptly conducted, but failed to produce any recommendations.

No further action was taken by the government until concerns were raised about the level of competition in the banking industry. Suddenly “price signalling” legislation was on the agenda, this time targeting the big four banks.

The current laws were first introduced by then Treasurer Wayne Swan as part of the government’s “Competitive and Sustainable Banking System Package”. They passed into law in 2011, and came into operation on June 6, 2012. There has not yet been any litigation involving these provisions.

Two forms of price disclosures are prohibited by the existing price signalling laws:

• private pricing disclosures between competitors are prohibited, without the need to prove that competition has been harmed in any way, unless made in the “ordinary course of business”

• public disclosures of information relating to price, capacity or commercial strategy are prohibited if made for the purpose of substantially lessening competition in a market.

Both prohibitions apply only to classes of goods and services prescribed by regulation; currently only banking services have been prescribed.

When introducing the existing laws, Wayne Swan indicated they would initially target banks because the ACCC had advised “there is strong evidence of banks signalling their pricing intentions to each other in a bid to undermine competition”.

The industry specific nature of the provision has, however, been roundly criticised. For example, in its submission to the competition review, the Law Council noted that there is “no principled justification for selective application of these provisions”. In addition, no criteria have been identified for determining which sectors ought to be prescribed.

The ACCC has also long argued that the sector-specific focus is unfortunate. The ACCC’s first submission to the review called for the industry-wide application of the price signalling laws consisting “with the principle of universality”.

The prohibition of unilateral price disclosures to competitors, without a competition test, has the potential to capture ordinary and pro-competitive business conduct. This was recognised during the drafting process when a series of banking-specific exceptions were added to the otherwise general prohibition of price signalling in the Act.

Despite the exemptions, the prohibition still requires no link between the signalling conduct and any form of collusion or facilitative practice, recognised as necessary before competitive harm is likely to result. As a consequence, the prohibition fails to appropriately distinguish between conduct which may cause harm to the market and that which may not.

The price signalling provisions were roundly criticised in submissions to the Harper Review. There were several calls for the provision to have industry-wide application, including from the ACCC, and many more calls for their full repeal.

The competition review panel concluded the current price signalling provisions do not “strike the right balance” in distinguishing between pro and anti-competitive conduct, and expressed the view that competition laws “ought be capable of general application to all parts of the economy”.

The review panel did not consider that there was any sound reason for prohibiting public pricing disclosures, such as announcements about future interest rate rises, noting that they were unlikely to raise significant competition concerns. To the contrary, the panel highlighted the potential for such statements to assist consumers in making informed choices.

In relation to private price disclosures, the preview panel observed that such disclosures may harm competition when used to facilitate collusion. However, they accepted that there were also a number of circumstances in which such disclosure is necessary for normal business.

However, to address concerns about anti-competitive price signalling, the review panel recommended modification to the existing prohibition on anti-competitive agreements (section 45). Although it considered this section in its existing form would capture most forms of price signalling, it recommended the prohibition be expanded to capture “concerted practices” having the purpose, effect, or likely effect of substantially lessening competition. It also suggested this cover “a regular and deliberate activity undertaking by two or more firms”.

The competition review panel’s recommendations should be welcomed. The existing provisions look more like industrial policy designed to align with a transient political agenda, rather than well constructed and universal competition policy.

Julie Clarke does not work for, consult to, own shares in or receive funding from any company or organisation that would benefit from this article, and has no relevant affiliations.