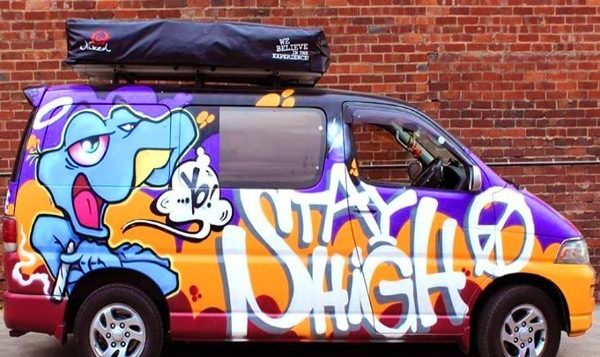 The chief executive of Wicked Campers has hit back at campaigners who paint over Wicked Camper slogans following the latest Ad Standards Board ruling.

“In the context of a slogan on a van which will be seen by a broad community the advertisement was totally insensitive to the personal anguish of sexual abuse victims,” the board found.

The Ad Standards Board has ruled against Wicked Campers on numerous occasions and outrage over the company’s advertising has inspired protest marches, petitions and calls for protesters to paint over offensive logos on vans.

For the first time Wicked Campers now faces commercial pressure over its logos with Lonely Planet confirming it has removed listings for Wicked Campers from its latest guidebook.

“Lonely Planet is a family-friendly travel company, and there are plenty of alternatives to Wicked Campers for campervan hire in Australia.”

But Wicked Campers chief executive John Webb has hit back at critics in a satirical statement which he says aims to address public concerns about the company’s “controversial artwork”.

“We employed a team of highly-intelligent, socially-conscious super monkeys to closely monitor the subject matter featured on our vehicles and scream loudly when offended,” Webb says in the statement.

“This initiative had been code-named ‘Moral Monkey Squad’ under a carefully constructed mission statement.  ‘Moral Monkey Squad are dedicated to satisfying the whims and wishes of the humour-inept, self-righteous moral majority while wearing little monkey tuxedos and funny hats’”

Webb also says Wicked Campers will seek to prosecute any protesters who paint or cover over slogans on Wicked Camper vans.

“Wicked Campers will no longer permit individuals or groups, to in any way manipulate the artwork or general appearance of its vehicles or property,” he says.

“Any person or persons found to be doing so will be swiftly referred to the police/authorities. It is generally understood that the penalty for such acts is public flogging, but we may be ill-informed in the specifics as our legal team consists of three crayon-wielding possums and one very good-looking banana.”