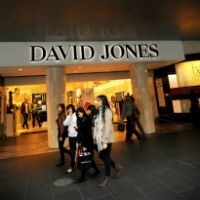 The fortunes of David Jones appear to be turning around, with South African parent company Woolworths Holding reporting a 10.3% jump in operating profits for the retailer for the five months to December.

With plans to increase the number of private labels in David Jones stores already underfoot, Woolworths reported operating profits of $107 million for the five months, with earnings from the David Jones department stores division up 14.9% to $100 million for the same period.

Gross margins for the department stores increased slightly, from 40% to 41%, but earnings from David Jones’ credit card venture with American Express dropped by 30% to $7 million, partially offsetting the gains from other parts of the business.

The results are the first to be released since Woolworths acquired David Jones for $2.15 billion in the second half of last year.

Woolworths also posted strong gains for Country Road, which it acquired a full stake in last year as part of the David Jones deal.

Country Road operating profit rose 9.4% for the period and sales were up 9.2%. However, gross margins fell slightly by 0.7%.

While Woolworths Holdings chief executive Ian Moir said he sees “signs of an improved retail environment” in Australia, he also used the results release to fire a shot at the previous management of David Jones.

Moir said there was previously a lack of vision at David Jones, while stores suffered from underinvestment and poor product assortment. A focus on costs had “come at the expense of the customer”.

But in a statement issued to SmartCompany, David Jones chief executive Iain Nairn said the David Jones “transformation program” is well underway, starting with the addition of new brands to the retailer’s shelves.

“We have completed a review of brand and space profitability and are improving our product assortment with plans to introduce a suite of new local and international brands, including those owned by Woolworths Holdings,” Nairn says.

“Pleasingly, a number of new brands have already been introduced, including Proenza Schouler, Herve Leger, Victoria Beckham Denim, Stella McCarthy Denim, Meja, Vine, Rag & Bone and The Kooples, with brands such as Stuart Weitzman, Seed and French Connection are expanding their footprint.”

“Plans to launch an integrated loyalty program and to significantly improve our in-store experience are well-advanced.”

“This is now the second year since Country Road and Witchery merged, so the low-hanging fruit was picked in the previous financial year,” Gordon says.

Gordon says Nairn, who previously headed up Country Road, and current Country Road chief executive Matt Keogh have “terrific track records” and so he expects the new management team for the businesses to “move quickly” to make the changes needed.

“David Jones certainly underinvested in their stores and there has been weak leadership there for some time,” Gordon says, echoing Moir’s comments.

“The previous board weren’t able to supplement the weak leadership of the executive team.”

“Now it appears they have a team capable of putting a turnaround strategy in place,” he says.