What the Australia-Japan Free Trade Agreement means for your business 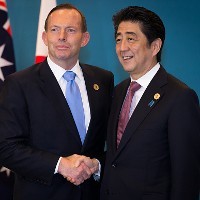 While the Japan-Australia Economic Partnership Agreement was secured by the government in early April, the two leaders officially signed the agreement in Canberra on July 8.

But while both leaders have heralded the agreement as a symbol of the “special” relationship between the two countries, the agreement has drawn a mixed response from business groups.

Among the winners are Australian beef producers, for which tariffs into Japan are set to drop from 38.5% to 19.5% over time, and winemakers, with the 15% tariff on bottled wine to be eliminated over seven years and the tariff on bulk wine to be scrapped immediately.

Fruit and vegie producers are also likely to benefit, with tariffs on products such as macadamia nuts and asparagus to be immediately eliminated. Tariffs on lobsters, crustaceans and shellfish will also go, with tariffs on tuna and salmon to be phased out over 10 years.

Miners will also benefit from the deal, with tariffs to be cut on some coal, oil and mineral products. The agreement will also seek to improve access to Japan for Australian financial and legal services providers, and extend intellectual property protections for Australian companies in Japan.

Australian consumers are also likely to benefit, with the remaining 5% tariffs on imported Japanese cars, electronics and white goods to be removed. The tariffs will be phased out over a period of up to eight years.

“Japan is one of the top three destinations for Australian agriculture exports and the agreement brings tariffs down substantially, which can only benefit Australian food producers getting their products into Japan,” says Mace.

While Mace says some details of the deal will still need to be ratified by the Australian Parliament, he says the agreement does include a ‘Most Favoured Nation’ clause, which means if Japan was to negotiate better trading terms with another country, such as the US, it would then have to match those terms with Australia.

“Overall it’s a positive agreement and I don’t see much in terms of downsides,” says Mace.

“There may be some who would have liked to have seen more but we can’t expect all tariffs to be dropped down to 0%. If we can get some tariffs down, then that’s a good thing.”

Mace says the price for Japanese electronics and cars will be reduced, but he says Australia no longer has a big tariff regime on these types of products.

“And it’s probably a bit late to try to save car manufacturers like Holden and Ford,” he says.

Bryan Clark, director of trade and international affairs at the Australian Chamber of Commerce and Industry, also says the deal is good news for Australian businesses.

But Clark says ACCI will be looking closely at how easy it will be for Australian companies to access the benefits of the deal. He says free trade agreements are often complex and it can be difficult for businesses to understand what the deal will mean for them, so ACCI will be monitoring how the government communities the opportunities of the deal with the business community.

While Clark says there has been a lot of publicity about the benefits from the deal for Australian beef producers, he says the businesses in the seafood and horticultural sectors also stand to benefit, as do those in the legal and financial advice professions.

“The interesting thing about this agreement is that it is quite comprehensive in the service sector,” says Clark.

Clark says there are “no losers as such” from the agreement, although rice and dairy producers may be disappointed not to see greater tariff reductions in their sectors.

“In the end, we understand the government was operating in a tough negotiating environment,” says Clark. “If you didn’t get anything, it is just the same as before.”

But Agriculture Minister Barnaby Joyce has spoken out about the deal, saying it does not go far enough for Australian producers in the dairy, sugar and pork industries.

While Joyce said in a radio interview on Tuesday the agreement puts Australia “vastly ahead of where we were”, he said Australia has given up more than Japan.

“That is the reality of the cards we deal with because we’ve given away most of our tariff negotiations,” said Joyce. “They’re gone. We don’t have a lot to deal with except the negotiations.”

Clark says ACCI has some concerns around the harmonisation of Australia’s growing number of bilateral trade agreements.

“We are fully supportive of efforts to secure bilateral agreements, companies can see a problem if there are differing agreements for the same country,” says Clark.

He says the Trans Pacific Partnership is “the next cab off the rank” and if this differs to what is contained in the agreement with Japan, Australian companies will then have three different ways of trading with the one country.