Father’s Day spending to hit $753.4 million: where will the money go and how can you get a share? 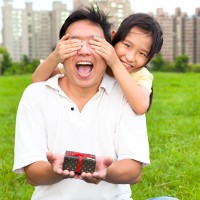 Lunches, tools and gadgets: it is going to be a big weekend for the dads of Australia, as sons and daughters around the country open their wallets to the tune of $753.4 million.

However, Aussies are willing to spend more on their mums it seems, with Mother’s Day spending in the year clocked at almost twice the amount ($1.4 billion) earlier in the year.

Taking dad out for lunch or dinner is set to be the most popular activity, bringing in $176.7 million for Australian cafes and restaurants, up 1.2% on last year.

Tools, hardware and electronics top the list of presents for dad, with Australians estimated to fork out $154.8 million or 4.4% more than last year.

Personal care products have grown by 12.7% this year, with an estimated $35 million spent on face cream, balms, ointments and other lotions and potions for dad.

Around $73 million will be used to buy gift vouchers, but those less personal gifts are falling out of favour with shoppers, falling 2.8% from last year.

Erica Stewart, co-founder of online retailer hardtofind.com.au, tells SmartCompany although Father’s Day is never as big as Mother’s Day, this year has seen quite a spike in sales.

Stewart says spending is up by about 50% in the lead up to the weekend and the website’s conversion rate is up by around 33%.

The the most popular items for dads are personalised gifts such as cufflinks, mugs or cushion covers and gadgets such as alarm clocks, iPod docks and iPad covers.

Hardtofind has done work to curate gift sections, distribute printed catalogues and amp up its search engine optimisation in the lead up to the peak spend season.

Stewart says she has noticed an upward trend in online shopping as men turn to the web to buy gifts for themselves and other men.

“I think we are all becoming so adept at online shopping and, remember, men have dads too,” says Stewart.

“There has been a definite shift as more men start to feel confident about shopping online.”