Fields of dreams: How independent grocer LaManna Direct is taking on the supermarket big boys 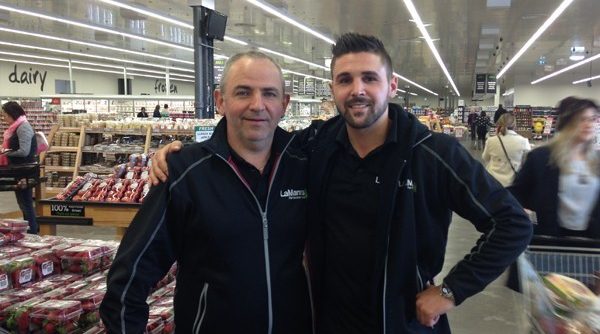 Patrick LaManna doesn’t mince words when he describes his first thoughts about the site his dad had picked out for the opening of their independent supermarket.

LaManna had just returned from overseas when his dad, Vince, a member of the second generation of the three-generation wholesale fruit and vegie operations family, showed him a rough and ready site at Essendon Fields, a commercial development adjoining Melbourne’s Essendon Airport.

“I said to him ‘I think you’re nuts! This place is a hole.’ I mean now it’s a lot prettier than it was back then. If you see pictures of what it was like back then you’d see it was an absolute hole,” says LaManna, now the managing director of independent supermarket LaManna Direct.

“It was an old plane hangar; it had been on short-term leases for the past 15 years. I think the police had used it as an impound yard for cars at one stage. I think [Melbourne gangland figure] Carl Williams had all his cars in here!”

After a lot of hard work to get the site into shape, the LaManna family’s dream of a retail outlet was realised when LaManna Direct opened its doors in November 2010. The LaMannas say it is the “largest single site supermarket in Australia”, although the family does not disclose details of the business’s financial performance.

It’s a big change from the small online retail operation the family was running after selling out of its wholesale business.

“We had eight staff in the online store, now we have 250 here. It’s a really good working environment, good people around us, friends, family, people who become like family,” LaManna tells SmartCompany.

Operating an independent supermarket is no easy task. Across the street from LaManna Direct is Coles; there are three other big Coles stores within a few kilometres, including a recently opened full line 4000m2 store in Coburg North. There are two Woolworths stores, a sprinkling of IGA stores, and an Aldi outlet nearby too.

There are four major players in Australia’s supermarket industry: Woolworths; Wesfarmers (Coles supermarkets); Metcash (IGA and Supa IGA branded stores); and Aldi. According to an IBISWorld supermarket industry report, Woolworths has 41.9% of market share, Wesfarmers has 31.7%, Metcash 8.5%, and Aldi 8.2%. IBISWorld estimates total industry revenue for 2015-16 to be about $93.3 billion, with annual growth rate forecast for 2011-16 at 3.8%, and 2.2% for 2016-21.

The IBISWorld report predicts the industry will remain fiercely competitive, especially as Aldi consolidates its offerings across the country and pushes into South Australia and Western Australia.

According to IBISWorld, this intense price competition will continue to place independent operators under extreme pressure, with the “supermarket shelf wars … expected to intensify over the next five years”.

With the German supermarket chain Lidl rumoured to be following Aldi’s lead and opening stores in Australia within a year or two, LaManna Direct and other independent operators might have even more competition on their hands soon.

Retail expert Kevin Moore, the chairman of Crossmark Asia Pacific Holdings, says supermarkets like LaManna Direct face stiff competition but by focusing on a well-defined and differentiated offering, store presentation and service, as well as effectively utilising retail technology, independents can more than hold their own.

Moore says supermarket chains in Scandinavia, and the likes of the New World chain in New Zealand, show that smart, smaller operators can be profitable even in a highly concentrated and mature industry.

“However, they have to be truly personalised in their service; they have to be constantly investing in their stores and their people to make them great places to shop. And the third thing, which is more about learnings from ahead of the curve, and also from NZ, is their investment in retail technology.”

Moore says independents should not trade on price but rather focus on the things they can do better than the major players.

“What the answer isn’t is to chop cost out of your people; it’s about taking away the work that doesn’t need to be done by people,” he says.

“But their independent grocers invest a lot more money in retail technology, so they have self-serve checkouts; they have electronic shelf-edge labelling, which allows prices to change automatically without people having to touch it. They have the ability for shoppers to click and collect within their local areas.”

The mantra of reinvestment and improvement rings true for LaManna.

“If you came here four years ago, you would’ve thought you were in a different place. The only thing that is the same as it was four years ago are the back walls, everything else has changed,” he says.

LaManna has also done his homework on what independent operators are doing in the North American and European markets. He has been especially impressed by the likes of Canadian chain Loblaws and Eataly, a gourmet US chain which now has stores in the US, Italy, Asia and Brazil. He says these examples have inspired his business to aim high in developing its shopper experience.

“We’ve changed the layout of our groceries, we’ve expanded it, we put in a lot of new fridges, we put in all new registers, expanded the café, new deli fridges, everything’s changed,” he says.

“I don’t like the word change: it’s improvement. We like to invest in our business because we’re going to be here for a long time.”

The battle for competition law reform and the effects test

Beyond the grocery aisles and checkouts, the independent supermarket sector has been waging a battle with Wesfarmers and Woolworths in the halls of Parliament to reform competition policy, in particular the fight has focused on Section 46 of the Competition and Consumer Act, which deals with the misuse of market power.

The calls for reform have been galvanised by the recommendations of the Competition Policy Review, led by Professor Ian Harper and handed down in March this year. Among the review’s 56 recommendations is a revamp of Section 46 to better take into account the “effect” of proposed conduct:

The primary prohibition in section 46 of the CCA should be re-framed to prohibit a corporation that has a substantial degree of power in a market from engaging in conduct if the proposed conduct has the purpose, or would have or be likely to have the effect, of substantially lessening competition in that or any other market.

The chief executive of MGA, Jos De Bruin, says the effects test proposed by the Harper Review is not about hindering competition, but about protecting the competitive process for big and small businesses alike in order to create a better outcome for consumers.

“What the ‘effects test’ does, as well call it, it actually apprehends people who do the wrong thing; who do land bank with the purpose of or the likely effect of reducing competition,” de Bruin says.

“It will apprehend people for deliberately keeping competition out of the marketplace, whether it’s supermarkets, telephone companies, airlines, you name it. It will stop any anti-competitive practice that will stop a competitor coming into a marketplace.”

De Bruin says the reform is necessary if small enterprises such as LaManna Direct are to be given a fair chance at competing with the major players.

“This is not a law that’s been suggested to protect competitors, not at all. What it does do is it protects the process of competition,” he says.

“It was a big risk that my old man (Vince) took and a lot of people said he was nuts trying to take on Coles and Woolies and do something as big as this,” LaManna says.

“My dad always said he wanted to open up Australia’s biggest food shop. My grandfather, when he first came to Australia, he first worked on the farms up around Colac and then he came to Melbourne and opened his own fruit shop and within four years he had eight around Melbourne in all the major shopping centres.

“After a while he got into bananas. So my father was always a wholesaler, from day one, from the age of 15, 16, and he wanted to become a retailer. He wanted to do something different.”

In a fitting touch, grandfather Pat LaManna and his brothers alighted at Essendon Airport when they first arrived in Australia in 1948 as post-war immigrants from Italy, embarking on the migrant dream of a better life.

The LaManna dream is alive and well but Patrick LaManna has some serious concerns about the state of independent supermarkets in Australia.

“I do feel worried about the future of independents,” he says.

“It is a worry because Coles and Woolies have taken over – they’re killing independents and they know it.”