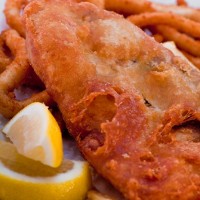 The humble fish and chip shop could be in trouble as consumers flock to alternative take-away options.

According to a report released by IBISWorld, revenue for the fish and chip industry is expected to decline at an annual rate of 1.1% in the next five years. In 2013-14, revenue is expected to total $684.9 million.

The research also found there has been little technological change in the industry and employment and enterprise numbers are expected to fall.

“The most import thing highlighted in the report is the level of competition facing the industry players,” says Lin.

“So the majority of that would be from other forms of fast food and take-outs. But at the same time you have your health-conscious and healthy trends that are detracting traditional consumer consumption.”

But the news isn’t all bad. Lin says some business owners are responding to these trends by increasing the range of items on sale to add a healthier touch.

“A lot of fish and chip shops are starting to scale up their provision of additional offerings,” says Lin. “Instead of a burger and chips as a side, it might be a salad instead.”

Fish and chip shop operators are also reducing their dependency on employed labour by taking up owner operation, according to the report.

This allows business owners to reduce wage costs and in turn boost their profit margins – but at the expense of their own time. Another way businesses are pushing back against consumer trends is by looking into new technology to make fried food healthier.

Lin says while low-oil air fryers aren’t being adopted on a large scale because they are relatively costly, they could offer a viable solution for those in the fast-food industry wanting to lure health-conscious customers.

In the meantime, Lin says a more pressing issue for fish and chip shop owners was the concentration of stores in cities and the competition they face with other take-away outlets.

“A lot of them are still located in the inner city suburbs and locations which at the same time are seeing a growth in a lot of hospitality establishments – especially fast food and take-outs,” says Lin.

“Fish and chip shops located in regional locations or outer-city locations are expected to do slightly better than inner-city establishments that are facing the competitive heat.”

There are an estimated 4232 fish and chip shops in Australia employing more than 5000 people.