Fitness industry on steroids as Aussies shell out $8.5 billion on gyms and fit fads each year 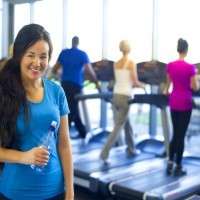 Australians spend $8.5 billion on their fitness each year, with Aussies showing little sign of slowing down on their health obsession – and smaller operators may be the big winners.

With a boom in gym memberships and niche active wear retailing, businesses within the fitness space are looking at a fit future.

The Suncorp Bank Cost of Being Fit Report, published on Thursday, found Australians households are each shelling out $2340 on gym memberships, sports equipment and the latest fitness trends each year, with the average Australian spending close to $1000, or $75 a month.

The research supports the picture painted by an IBISWorld report last year, which revealed fitness-related businesses had a collective revenue total of $1.31 billion, with over 2800 businesses nationwide.

Yet the IBISWorld report pointed to an estimated slowdown in the trend, forecasting only an estimated 3.3% growth rate over the next five years, telling in an industry where competition is high, and the assistance level is low.

Aaron Smith, founder and chief executive of pilates company KX Group, agrees there will likely be a slowdown in the bigger industry players, but says the market is ripe for smaller, niche operators.

“Boutique fitness has seen a massive boom and the next couple of years it will skyrocket,” Smith told SmartCompany.

Smith believes customers will turn to boutique offerings, which they are willing to pay a premium price for, because of a shift away from “just being seen as a number” by fitness businesses.

“I think it’s due to a general shift in the way we like to be sold to. We don’t like push selling anymore, we like to be wined and dined,” says Smith.

And Smith believes it will become harder for the saturated 24-hour gym market to sustain its growth if players do not reform their contracts and customer service.

The $2.9 million KX Group has grown 117% since its inception and Smith says he is predicting 2015 will be its biggest year yet.

“This year was huge for us,” says Smith, pointing to the company’s expansion last year from Melbourne to Sydney, ands its plans to further expand to Perth and Brisbane.

Smith says there are some fitness “fads” that will come and go, such as the recent popularity of hybrid exercises like ‘piloxing’ (pilates and boxing) and classes such as dance craze Zumba, where “people make a lot of money quickly and then leave”. But he believes the broader fitness trend is here to stay.

“Australia is already on to it… All we are doing is just increasing the overall percentage of people exercising and that is great at the end of the day.”