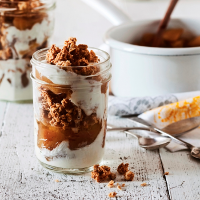 Australian organic yoghurt manufacturer five:am has been snapped up by UK-based consumer product giant PZ Cussons for a cool $80 million.

The payment will be made in cash, with another $14 million payable to five:am subject to the performance of the company in the year ending 30 June 2015.

Five:am was seen as hot property after its recent expansion into the burgeoning Asian diary market. Its revenue for the 2013-14 financial year was $35.6 million.

In May, founder and former owner of five:am, David Prior, told SmartCompany the business had begun to entertain offers from strategic partners and would “never rule out” being completely acquired.

Just three months later, Prior is now saying he is delighted five:am had “chosen a great home for the future.”

In a joint statement, the chief executive of PZ Cussons, Alex Kanellis, said five:am had become a market leader in the Australian organic food category since its launch in 2011.

“The cultural fit with PZ Cussons was apparent immediately and I am sure that the business will flourish under its ownership,” said Kanellis.

IBISWorld senior industry analyst Ryan Lin told SmartCompany the Australian yoghurt industry is a growing market, with retail sales of yoghurt forecast to be around $1.2 billion in 2013-14.

“While it is difficult to comment on the inner workings of PZ Cussons, we expect that the branding, innovation and growing interest in yoghurt consumption has placed five:am in a position to capture future growth, especially in the ever popular organic and natural foods segment,” says Lin.