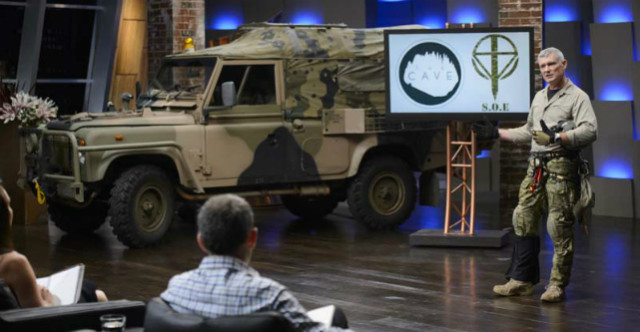 Swimming with sharks can be a dangerous activity for the uninitiated and it’s not everybody’s cup of tea.

But it can be very rewarding and fun.

I should explain at this point that I’m not referring to the sea-dwelling creatures with nasty big teeth; I’m talking about the five investors that make up the panel on Channel 10’s reality TV show Shark Tank.

No blood in the water here, but for the unprepared and overconfident the encounter can be almost as brutal.

Our appearance on Shark Tank to pitch The Adventure Group (TAG) to the sharks was the culmination of a long journey, and the result of in-depth planning and preparation, a shed load of hard work, auditions and lots of phone calls and emails.

It was also on the back of a hell of a lot of soul searching, discussion and ‘war gaming’ before reaching the decision to give it a go.

Coming from a special operations background and being used to living in the shadows and always flying under the radar it was a difficult decision to make and one that was somewhat counter intuitive. Talk about jumping in the deep end on national TV.

However, you can’t sell a secret …

It has been, without doubt, a steep learning curve and a voyage of discovery – you have to pay for rides like this at the Royal Easter Show. And really, the ride’s only just begun.

So here’s what we learnt from swimming with sharks.

Don’t die not knowing. Be brave and give it a go. If it doesn’t work you are no worse off than when you started – who dares wins.

That old military adage that ‘time spent planning is seldom wasted’ holds true. Do your research. Know your target audience, on and off set – know your sharks.

There’s plenty of information from Series 1 (and now Series 2) so there’s no excuses. Once you’ve done the research, make a plan, keep it simple and rehearse, rehearse, rehearse. You’ve only got one shot at this, make it count. This holds true for most things in life.

This is your pitch, own it. Work the angles to make the sharks want to be involved.

If you get one, or more, on the hook take the offer. If it’s not what you were after you can try and renegotiate after the fact, and failing that you can always withdraw during the due diligence and agreement negotiation phase.

Be willing to negotiate during the pitch and always have a strategy and an endpoint in mind. Remember, the sharks have made an offer for a reason.

The more complex you make your pitch and supporting facts and figures the more likely it will all come unstuck. Keeping it simple will make it easier for you to remember and easier for the sharks to understand which means a better chance of getting a deal. A simple plan executed well is priceless.

Take a deep breath and look confident but not cocky. Practice your poker face – uncertainty and signs of weakness may be exploited. Don’t forget to enjoy the ride – it’s too late to turn back now.

Underpinning all of this is a healthy dose of resilience and determination; nothing worthwhile in life is ever easy.

Be brave and go for a swim with sharks. When you do, dive in head first, the water’s lovely.

Michael Donaldson is the founder of TAG and a former special forces veteran with 20-plus years of experience. After much haggling, sharks Andrew Banks and Steve Baxter made a deal with TAG for $100,000 in return for 30% equity.