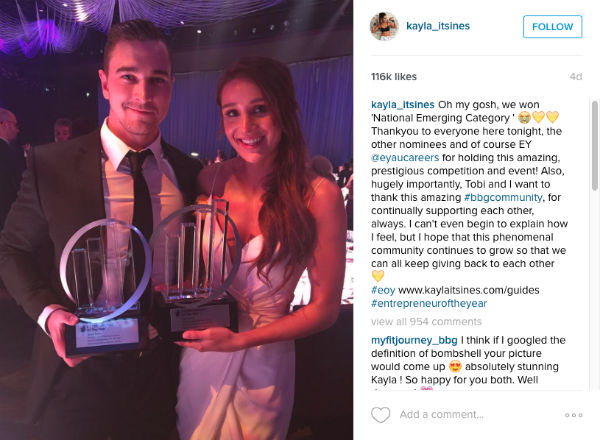 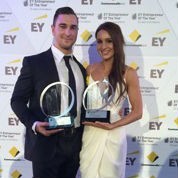 Tobias Pearce says he and partner Kayla Itsines never thought of themselves as “entrepreneurs”.

“We’ve never put it under that title but we’ve always tried to do things a little differently, to make things work in ways that were not done before” Pearce told SmartCompany.

“We thought of ourselves as ‘self-innovators’ … but in today’s society, it’s been given a new name.”

But Pearce and Itsines have been trying the “entrepreneur” nametag on for size, having won the Emerging Entrepreneur of the Year category for the Central Region of EY’s annual awards earlier this year.

The duo was named the national category winners at an awards dinner in Sydney last week.

“To be honest, it was definitely something we have never experienced before. We were extremely surprised to win,” Pearce says.

“We didn’t really think we had much of chance given the amazing competition we were up against.”

But Pearce and Itsines were a logical choice for EY’s judges, who said they were impressed by the pair’s “tenacity and entrepreneurial spirit”.

“They have delivered an inspirational success story with phenomenal revenue and profit growth in a short space of time,” the judges said.

Kayla Itsines has become a household name in the Australian health and beauty scene.

Through the Bikini Body Training Company, Itsines offers exercise and eating guides to a predominately female audience who want to lose weight and gain confidence.

Itsines, together with Pearce, has built the business from the ground up almost entirely on social media, with more than 2.8 million fans on Facebook and more than 3.8 million on Instagram.

She found the training methods she was using at that gym did not help her clients achieve what they wanted, so she went about developing her own training programs and founded her own company.

Word-of-mouth spread among her clients but it was social media, especially Facebook and Instagram, which fuelled the growth of the Bikini Body Training Company.

Pearce became involved in the business in 2012, having previously owned a number of franchises and his own consulting company in the health and fitness space.

“It grew a lot bigger and quicker than I thought it might,” Pearce says of the growth of his and Itsines’ business during the past 12-18 months.

While Pearce does not disclose the company’s financial details, the business employs 25 employees in Australia and several others in the United States, as well as a host of contractors around the world.

He says “in terms of volume”, Australia and the US are the company’s largest markets.

For the past 18 months, the Bikini Body Training Company has offered its customers a single purchase service, which involves a once-off fee for the training guides, starting at around $70, followed by post-purchase marketing that is focused on getting customers to purchase additional guides as extensions.

However, Pearce says the business is migrating to a subscription platform, which will be priced at a lower, monthly rate but ask users to sign up for a minimum period.

“We believe it will help to maintain a lifestyle change, so we hope they continue with the lifestyle,” he says.

Asked how he and Itsines have managed the rapid growth of the business in such a short space of time, Pearce says “it all just comes down to efficient time management and people management”, adding that automating processes has helped to “minimise” the administrative burden of managing a rapidly growing business.

“We’re obviously quite young and we want a young and fresh culture,” says Pearce, adding building a great company culture is a key priority.

“We take our staff our for dinner, we play laser skirmish with them.”

“Kayla and I are just normal, 23, 24-year-old people, we’re not about showing off money, we’re focused on delivering the best product to people.”

Pearce says he and Itsines “see the concept expanding” when asked about what the future holds for the business.

“In a nutshell, we’re expanding away from the current content,” he says.

“At the moment we provide weight-loss advice and body confidence advice … we plan to move into coaching for other goals.”

Pearce and Itsines don’t take the business’smassive social media following for granted, with Pearce says growing a social business is not about simply broadcasting content.

“The way we use social media is different to a lot of other people,” Pearce says.

“It’s purely about relevancy. We try to provide high quality but relevant content.”

Part of sharing relevant content on social media is putting your own likes or opinions to one side, Pearce says.

“Forget your opinions and desires, try to understand it from the customer’s perspective,” he says.

“It’s about honing what you want your business to be, want customers want to see and want to hear.”

Pearce says sharing content that is of high quality is equally important.

“A lot of people think they can just put content on social media and people will automatically love it,” he says.

For Pearce, it comes back to the fundamentals of commerce.

“A lot forget you are providing a service or a product and people are paying money for it,” he says.

“You have to respect your customers by making sure [the content] is the best possible.”

The Kayla Itsines Facebook and Instagram accounts are filled with personal success stories from customers of the Bikini Body Training Company and Pearce says sharing content from within the business’s community is a drawcard for new followers.

“I definitely think so, it gets a large amount of people engaged,” he says.