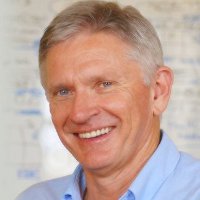 Entrepreneur Graeme Wood is set for a massive payday after Expedia launched a bid for Wotif.com Holdings yesterday.

The US-based travel booking giant is bidding $3.30 a share in a deal valuing the company Wood founded at $703 million.

Wood still owns 19.7% of Wotif, valuing his share at $138 million. Here’s nine things you may not know about the entrepreneur:

Wood was born in Rockhampton and his “struggling family” moved to Brisbane when he was five.  Wood went to state schools but played cricket in the GPS competition against “spoilt little brats” from private schools. “There’s probably a bit of chip-on-the-shoulder attitude there,” he once admitted to The Australian‘s Glenda Korporaal.

2. He was around for the early days of the internet

Wood holds a Bachelor of Economics and a Master of Information Systems.  His career started in information technology beginning with NCR and later IBM.

Wood says he became “a serial entrepreneur” in the 1980s. One of his businesses included importing cheap eggs from NSW into Queensland. But it was when Woods turned to the internet that he finally hit his stride. Woods founded online travel company Wotif in 2000 selling vacant hotel rooms on the internet at last-minute cut-price rates. In 2006 Woods floated Wotif on the ASX for $670 million.

4. Wotif is not his only online success

Wood also owned 64% of Australian music startup We are Hunted which was sold to Twitter last year. Wood invested around $3 million in the startup which was originally called Wotnews. He says the deal was a financial success for him and that he is now “lining up to have another crack” at other early stage investments.

Wood may not have ever run for office but he has arguably had more political clout by making Australia’s biggest ever political donation of $1.6 million in 2010 to the Greens.

6. This greenie owns a timber mill

In another controversial move, Wood paid $10 million with fellow Rich Lister Jan Cameron to buy Triabunna native forest woodchip export mill on Tasmania’s east coast from timber giant Gunns. The deal sparked controversy in the Apple Isle because Cameron and Wood, both passionate environmentalists, plan to turn the mill into an eco resort in about five years time. The Tasmanian forest industry is up in arms about the deal, believing it threatens the future of native logging and the state’s timber industry.

7. He’s got an Order of Australia

Wood was made a member of the Order of Australia in 2012 for services to business and his philanthropic work through the Graeme Wood Foundation, conservation organisation Wild Mob and arts charity Artology. The organisation unlocks the creative potential of young people through experiential learning in the performing arts, through programs such as WotOpera.

8. He had a fail with the Global Mail

Wood quickly discovered journalism was one of the best ways to give away money with his philanthropic backing of non-profit journalism website the Global Mail. The website had a tumultuous life with the departure of managing editor Monica Attard after just a few months and Wood announced its closure in February this year.

9. And a win with The Guardian

After the failure of the Global Mail, Wood emerged as the backer of the Australian arm of British media organisation The Guardian. Wood described his involvement as “about making money”, in contrast to his philanthropic backing of The Global Mail.

My husband used WOTIF to book our overseas accommodation. Due to covid we are unable to travel . We’re trying to get our money back or getting a refund but the voucher they gave us wasn’t there . We lost at least $1,000.00 . And the founder is worth 140 million . We worked hard to save money to travel but we’re being punished because the company doesn’t help us . We will never use WOTIF & telling all our friends about . My husband is so frustrated . A $1,000 is a lot of money for us . So please help us get our money or voucher whatever . For the love of God . We’re entitled to have our money back .