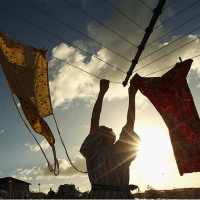 Most Australian backyards have one but the company behind the iconic Hills Hoist will no longer make and sell the clotheslines that made it famous.

Hills, which has been operating for close to 70 years, has this week signed an exclusive license deal with Woolworths for 240 of the Hills clotheslines, clothes care and garden products.

The deal is for a minimum of seven years, with three options to renew for additional four-year periods. Hills will maintain ownership of the brand and its products, with Woolworths to pay an annual licensing fee, which may increase if sales targets are met, to sell the items through Masters, Home Timber and Hardware and Big W.

For Hills, the deal marks a departure from the roots of the company, which first began selling Hills Hoist clotheslines in 1945. In recent years, the company has transformed itself into a provider of technology services in the security and surveillance, health and aged care, audio visual, automation and communications industries.

Hills chief executive Ted Pretty said in a statement the deal will allow Hills to focus on these new areas.

“This agreement will allow Hills to focus on building our technology business, particularly our security and healthcare portfolio to achieve our stated growth ambitions,” Pretty said.

“Additionally, we will enjoy greater certainty of earnings and a strengthening of our profit performance. There will be a positive impact on the balance sheet from the reduced requirement for working capital.”

Pretty said Hills has “no doubt” Woolies is the right company to take care of its iconic products.

“Woolworths is one of Australia’s pre-eminent retailers with national coverage and penetration across a range of retail channels,” he said.

David Gordon, retail expert and partner at accounting firm Lowe Lippmann, told SmartCompany Woolworths has in the past “encountered resistance from local suppliers regarding partnering too closely with them because of the impact it might have on these suppliers’ relationship with Bunnings”.

“This seems to be a proactive attempt to secure products and the supply chain … it make a lot of sense,” Gordon says.

While the exact amount of cash Hills will receive from the deal has not been disclosed, Gordon says it is clear Woolworths is not seeking to become an “overall distributor to the market” for Hills products.

“They are doing this to gain an exclusive retail deal,” he says.

While Gordon says the deal could be “opportunistic” on the part of Woolworths, it may also signal “the beginning of a considered strategy where they will use this type of arrangement to partner with suppliers”.

“If it is more than just opportunistic, it is something a bit special, with a strategic, longer-term objective,” he says.

SmartCompany contacted Hills but a response was not available prior to publication.