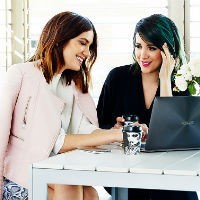 Home-grown online activewear retailer Stylerunner is striding ahead of its competitors, having recently scored a deal with US yogawear giant Lululemon Athlethica.

While most Australian retailers would have to put in the hard yards to secure a deal with one of the biggest brands in its category, Julie Stevanja, co-founder of the Sydney-based e-retailer, told SmartCompany it was Lululemon who made the first move in August.

“They approached us,” says Stevanja. “They had a look at the online space globally and identified potential partners. We were their first partner of choice.”

The collaboration will see Stylerunner curate Lululemon products in a monthly collection for its customers, styling the gear to reach a broader audience of activewear-hungry consumers in Australia and globally.

Stevanja says no money exchanged hands for the deal but she believes the partnership will be mutually beneficial for both companies due to Stylerunner’s continued reach domestically and abroad.

“We were the first to market and we are the most advance in terms of a premium fashion focus on activewear,” she says.

US-based Lululemon began its decent on Australian shores last year and currently has several bricks-and-mortar stores in Sydney and Melbourne.

Stevanja says the Australian market is certainly of interest to the activewear giant, but she believes the company chose Stylerunner because of its global appeal.

“We are primarily an Australian business, but we do make an impact globally,” she says.

Around 16% of Stylerunner’s sales are international and many of its social media fans hail from outside the country, according to Stevanja.

She says the site’s main appeal to suppliers and customers alike is its fashion-focussed styling of products, which allows activewear to be seen outside of a traditional ‘sports’ positioning.

“Brands know their customers want to see their products in new ways, to show them how to style in cool and on-trend ways” Stevanja says.

Stevanja says Stylerunner is expecting solid Christmas sales but believes the New Year will deliver the strongest spike for the business.

“January is the big time of year for us, with new years’ resolutions. We are expecting a huge January this year.”