How Thankyou Group raised $1.4 million by asking supporters to pay what they want for a book

Social enterprise Thankyou Group will launch a range of baby products and expand into New Zealand, after raising $1.4 million through a crowdfunding campaign that invited backers to pay what they want for a book.

But Chapter One isn’t a book about some random idea they hacked into over a month, it’s a story author Daniel Flynn has been sharing since he co-founded Thankyou with Justine Flynn and Jarryd Burns in 2008.

After speaking at schools and corporate events, Flynn saw how the story resonated with people.

“The book is a risk but we knew the story had weight,” Flynn told SmartCompany.

After writing the book, the Thankyou team began a plan a crowdfunding campaign with an unimaginable sales target.

About a year ago, they started developing key messaging and two months before launch they were still fine-tuning the campaign.

“We’ve got this book that funds the future and we hoped to raise $1.2 million,” he says.

“The one thing the campaign was missing was urgency.”

To create a sense of urgency, Flynn decided to lock himself in a makeshift warehouse, a space offered to them by Essendon Airport in Melbourne, for just 28 days.

“How do we communicate to our supporters we need them to buy this now?” he says.

By Flynn placing himself on the working line, frantically packing and delivering books to ensure people received their delivery in a couple of days as promised, the Chapter One campaign got its ticker.

The social enterprise even called on overseas tech developers to build a website that could combine crowdfunding with a pay-what-you-want feature.

“You’ve got to be willing to push the boundaries and commit to that if you’re going for that bold result,” Flynn says.

As well as being bold, Flynn encourages fellow social enterprises to come up with original ideas that reflect their own story.

“A book is a very unconventional way to do something like this – the only reason we did that is we know the story resonated with people.”

Video formed an important part of the Chapter One campaign but at more than seven minutes long, Flynn was worried Thankyou was attempting to cover too much ground.

“It was a layered message campaign,” he says.

But the video has been the social enterprise’s most successful yet, racking up more than 550,000 views across various channels within weeks.

“This one topped that in five days.”

While analytics do not reveal if a viewer has watched the video to the end, Flynn and his team were unable to track how much of the video was actually seen, leading him to wonder if their messaging had failed.

“What gave us comfort is even though they haven’t watched to the end, it is translating into sales,” he says.

When the campaign ended, Thankyou had exceeded its fundraising goal by $200,000 and sold more than 40,000 books.

They also picked up large corporate orders from the likes of Zadel Property Education, National Australia Bank, Domino’s Pizza and the Commonwealth Bank.

You have to make every call and knock on every door to ensure you’ve set yourself up for success, Flynn says. 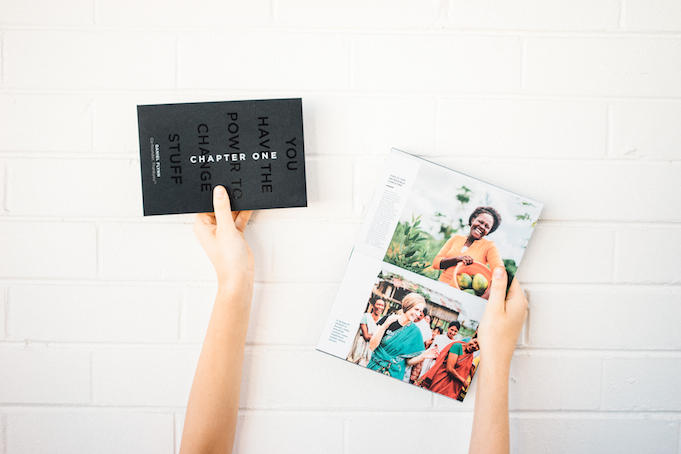 Go in with a plan

Flynn believes the success of Thankyou’s campaign is a result of traction, momentum, audience-building and community support generated over many years.

The “buy a book, fund a future” campaign itself took two years to create.

“Planning is so crucial, we spent two years in planning and one year really in hard core planning,” says Flynn.

From refining the book and its concept through to identifying potential potholes two weeks out from launch, every step of the campaign was well considered, he says.

“A lot of work goes into trying to figure out what could go wrong and how can we be prepared,” he says.

When Thankyou launched the video, there was already a line-up of people ready to share it.

“After that comes the scary moment, when you’ve done your best to build momentum, and then it’s up to the world,” he says.

The Chapter One campaign was designed to drive Thankyou forward on its mission of eradicating global poverty as it embarks into new waters.

Thankyou’s future fund will be topped up with $200,000, with Flynn planning to reveal more about the group’s top-secret “elephant in the room” project later this year.

Half of the remaining cash, $600,000, will be donated to the launch of Thankyou Baby, a dermatologically-tested baby care range, including diapers. All profits from the sale of the products will be donated to address critically high mortality rates of mothers in labour and newborn children in developing communities.

The remaining $600,000 will go towards Thankyou’s expansion into New Zealand and work is always underway for this next campaign challenge.

“The really unique idea behind it is how do we engage not just a few people but a country over a two- to three-week period,” Flynn says.