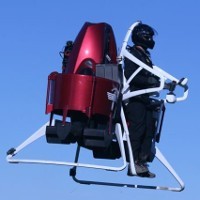 It might sound like something out of space age cartoon The Jetsons, but New Zealand company Martin Aircraft believes it will be selling personal jetpacks within the next two years.

The company, which was founded by New Zealand bio-chemist Glenn Martin, has this month raised $NZ6.5 million ($A5.9 million) from 40 investors, ahead of a planned float on the Australian Stock Exchange.

Martin Aircraft chief executive Peter Coker told SmartCompany while the timeline for the IPO is yet to be finalised, the company is hoping to raise $20-22 million through the listing.

Coker, who joined the company in April 2013, says Martin Aircraft originally planned to go public in New Zealand but changed its plans after receiving higher than expected interest from Australian investors. Of the 40 investors who contributed to the pre-IPO raise, 38 are Australian.

“We are finding a lot of interest in Australia and so the volume we can achieve is greater,” says Coker.

“The good thing about Australia is the understanding of technology and the willingness to support companies of a high risk level. That’s a good thing for us. We’ve had no difficulty explaining to potential investors what we have on offer.”

The pre-IPO funds, as well as the capital raised through the float, will go towards manufacturing the jetpacks, which Coker says will initially be aimed at the “first respondent” target market of police, fire, ambulance and search and rescue operations.

Work is also underway on an unmanned version of the jetpack, which will be able to carry up to 105kgs and is envisaged to be used in sectors such as agriculture or in tandem with a “first respondent” aircraft.

Coker says the next step will be offering “jetpack experiences” in the tourist environment, as well as demonstrating the aircrafts on a global stage. By 2016, the company believes it will be ready to sell the aircrafts to individuals.

Martin Aircraft has its origins in Glenn Martin’s garage more than 30 years ago, when Martin dedicated his career to building his own jetpack. Martin remains on the Martin Aircraft board and is the company’s single largest shareholder.

Since the first lift-off a piloted jetpack in 1997, Martin Aircraft has built 12 different prototypes and a total of $20 million has been invested in the endeavour.

“The jetpacks will be a major change in the aviation industry in the future,” says Coker.

“The opportunities it presents are quite substantial.”