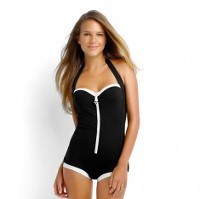 The swimwear brand – still owned by its founders, the Halas family – has had international success in recent years, opening stand-alone stores in the United States last year.

Peter and Yvonne Halas established Seafolly in Sydney in 1975 and the swimwear brand now has revenue of over $100 million a year and sales in 42 countries.

In Australia, aside from its online presence, the brand has 10 stand-alone stores across Australia, as well as numerous stockists and a partnership with Myer.

The LVMH group already has a string of high-end fashion labels under its umbrella, including Fendi, Givenchy, Marc Jacobs and Tag Heuer, as well as alcohol labels Moet and Chandon and Belvedere vodka.

Seafolly is believed to be in late stage talks with the group and a deal is expected to be announced by the end of the year.

“It doesn’t seem like the most natural of marriages,” says Walker.

Walker says an LVMH acquisition of Seafolly would be based on a commercial decision to consider other streams of income, but may also come with risks for the luxury retailer.

“I don’t think you could call it core business. It’s a definitely a different design and category, and in some respects, a very different consumer,” he says.

Walker says LVMH’s core brand, Louis Vuitton, has anecdotally had some of their best years recently, underpinned by a massive upsurge of demand in Asia.

“That suggests they are cashed up,” he says.

While the reports do not suggest a price tag on the Aussie swimwear label, Walker says it could potentially be a good pay day for the family-owned company.

“This could potentially be another Australian-done-good story.”

Seafolly and L Capital were both contacted for comment but SmartCompany did not receive a response prior to publication.