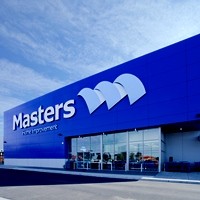 When Woolworths delivered its half-year results in February, the numbers for its Masters hardware chain were sobering. On sales of $393 million, Masters, a joint venture between Woolworths and US company Lowe’s, lost $71.9 million in six months. Put another way, for every dollar of sales in Masters in the second half of 2013, it lost around 23 cents.

Quarterly sales results recently released by Woolworths indicate things could be going from bad to worse at Masters. Woolworths management have touted that quarterly sales increased from $128 million to $179 million year-on-year. Masters added 16 new stores (from 29 to 45) in the last 12 months. It’s the growth in the number of stores, rather than growth in sales per store, which has ensured Masters is “Australia’s fastest growing hardware store”.

The bad news is that quarterly sales per store decreased from $4.41 million in Q3 2013 to $3.98 million in Q3 2014 (a decline of 9.4%). In Perth on Tuesday, Wesfarmers announced store on store sales growth of 9.1% for Bunnings, Masters’ key competitor. Customers are still buying, just not from Masters.

A analyst webcast had more questions on Masters (which commands less than 1% of Woolworths’ sales) than any other Woolworths business, indicating serious disquiet among investors about how things have gone so wrong so fast.

As a late mover into the “big box” hardware sector, Masters has often had to lease or develop sites that have been passed over by its larger competitor, Bunnings (which is owned by Woolworths’ arch-rival, and Coles owner Wesfarmers). At times, its rush to grow led to real problems. For example, its application to develop a store in Ballina (near Byron Bay) on a flood plain was rejected by the local council in March 2013. This led Masters to apply only months later to develop a store in Lismore, some 30 kilometres to the west. This new site is next to an existing Bunnings store and was clearly not Masters’ first preference.

The rush to secure and develop sites has created investment decisions that seem, at times, capricious. As fast growth seems to have been the imperative, Masters’ “big bang” approach created massive up front development costs that are a major drag on corporate earnings.

Not all new entries into the Australian retail industry have been as inauspicious. Notable among the successes has been the German retailer Aldi that has patiently built a portfolio of 340 stores over 14 years – a new store on average every three weeks.

As a privately owned firm, Aldi does not publish sales and profit figures, although informed estimates suggest it garners around 10% of Australian grocery sales from its Australian stores. Aldi has signalled its intention to open new stores in South Australia and Western Australia over the next few years, continuing its patient, staged approach to its Australian rollout.

Strategic management researchers often suggest firms should “stick to their knitting” – doing what they know well and knowing what they do well. Aldi knows what it’s good at – selling discount groceries. Founded in war-ravaged Germany in 1948 by the Albrecht brothers (the name is a derivation of Albrecht Discounts), Aldi keeps a limited product range of less that 1500 SKUs – or products – per store, while Woolworths and Coles often have more than 10,000. This limited range has many benefits – it enhances Aldi’s buying power, facilitates smaller stores, increases product turnover and simplifies inventory management.

In store, Aldi uses simple and effective palletised logistics for its fast turnover products and keeps its staffing levels low. Around 95% of its products are own-brand, and the quality of these products is often excellent. These are sourced both locally (for most fresh foods) and from its global supply chain (for many longer shelf life products).

Aldi’s patience has allowed it to build retail scale slowly, centred on its five major Australian distribution centres (two in Victoria, two in NSW and one in Queensland).

Getting access to new retail sites has been a real problem for Aldi, as Coles and Woolworths reportedly locked them out of many suburban centres through restrictive agreements with landlords. In response, Aldi was patient, pursuing shopping centre vacancies when they arose, but also building a large number of standalone sites when the opportunities emerged.

These tactics are a sign that Woolworths and Coles are too big and too dominant in the Australian grocery industry. With a combined share, by some estimates, of 80% of Australian grocery sales, new growth has to come from areas where Woolworths has limited know-how and little brand equity.

Slow and steady wins the race

With the benefit of hindsight, it could be argued that Woolworths’ Masters rushed foray has been driven more by machismo than fundamental strategic management thinking.

Wesfarmers’ success with Bunnings was a sore point for Woolworths’ corporate management – whose grocery business had seen off the challenge of Coles prior to Wesfarmers acquisition of Coles in 2007. The launch of Masters has certainly created an internecine war in the hardware industry, but so far Woolworths has been the main victim.

In comparison, Aldi has a fundamentally valuable point of differentiation in its market – namely low prices. Aldi delivers this differentiation through strong internal consistency in terms of efficient systems and processes, a culture of corporate modesty and the patience to successfully execute its growth strategy over a long period of time. In essence, its management is driven by sound reasoning, disciplined consistency and patient execution.

Masters is on track to lose half a billion dollars before Woolworths hopes it to become profitable in 2016. That is serious money, and the Masters investments continue to limit Woolworths’ abilities to invest in and renew its existing portfolio. The worst-case, but highly possible, scenario is that the turnaround does not happen and the losses continue to escalate.

John Rice is an associate professor in strategic management at Griffith University.