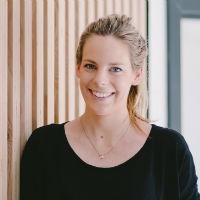 Jess Ruhfus says the best way to describe her strategic brand collaborations startup Collabosaurus is a cross between LinkedIn and Tinder.

“There’s nothing like it out there at the moment, so that would be the closest comparison,” says Ruhfus, explaining Collabosaurus as an “online matchmaking site for brands”.

The platform helps small businesses find each other for various collaborations including events, products or brand partnerships.

Businesses can fill out a profile that includes what they are looking for in a partner, such as a similar target markets, and what they have to bring to the table in terms of their own marketing assets, such as their social media following. A list of potential matches is then generated and if a match is made, the businesses are invited to collaborate.

“It is all about brands connecting rather than individuals connecting, but it does have that same professional networking aspect as LinkedIn,” Ruhfus says.

But despite the professional basis, Ruhfus says dating app Tinder was equally an inspiration for the idea.

“I haven’t used Tinder myself, but the whole idea when I was coming up with Collabosaurus was we need to make this whole thing simple. I thought, wouldn’t it be interesting to add that swipe element?” she says.

Ruhfus says the app version of Collabosaurus, available later this year, will actually allow brands to swipe left or right on potential matches.

The best part? Unlike Tinder, there’s no embarrassing rejection.

“When I was coming up with the idea I did a lot of market research,” says Ruhfus, who comes from a background in PR and small business event management.

“When I spoke to small businesses, they were often really hesitant because they were scared of rejection and getting turned down. So Collabosaurus actually has an anonymity feature, so you don’t have to reveal your brand, until both brands decide the collaboration is mutually beneficial.”

Collabosaurus has not fully launched yet, but is in a private beta stage as it gathers users for a full launch after Easter.

“We want everyone on the site before we launch the match feature,” says Ruhfus.

“The thing is you need to have a massive amount of members to have value matches come out of it, so we’ve held off.”

But Ruhfus says the Collabosaurus member base is almost there, with “a real mix” of brands having signed up.

“So far lot of jewellery brands, food and events, those have been the big three,” she says.

“I was really targeting the fashion, beauty, lifestyle, food and beverage industries because that’s where my background is. I know they’ll understand the idea because they are very product-focussed,” she says.

The application process takes two minutes to complete, according to Ruhfus, who says the platform is designed to cut down the time-consuming process of traditionally finding brand partners.

“All that reaching, hustling and negotiating time is significantly cut down,” she says.

Collabosaurus is also open to PR and events professionals looking to tee-up clients with other suitable brands.

Ruhfus say the other big drawcard of Collabosaurus is the marketing asset barter system, meaning an SME doesn’t necessarily need a huge budget.

“You can spend $10,000 on an advertising campaign to reach a disinterested audience, or you can reach out to a relevant brand with a similar audience that matches yours and get in front of those people. That’s super valuable in the end.”