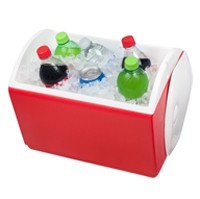 Most Australians know it as an Esky but two entrepreneurs in the United States have transformed the humble drinks cooler into a multi-million dollar business.

Ryan and Roy Seiders are the founders of Yeti, a company that sells premium coolers strong enough that even grizzly bears can’t open them when they are locked.

This year marks the 10th anniversary of the Yeti launching into the North American market, and as Inc reports, the Seiders brothers have created a cult brand from a low-end commodity.

Originally created by the Seiders to satisfy their need for a drink container that was strong enough for them to stand on while fishing, Yeti coolers were originally priced at between $US250 and $300 each, which was 10 times the price of an average cooler on the market.

Private equity firm Cortec Group Management Services purchased a majority stake in Yeti in 2012 and according to Reuters, the firm has hired investment bankers for an initial public offering, which could take place later this year.

Speaking to Inc, Ryan Seiders said he and his brother learnt how to build things from their father Roger Seiders, who invented a glue the fixed a common problem with fishing rods.

“He always had woodworking equipment, so we’d get our hands dirty and make stuff,” he said.

Their father also taught them about what it meant to run their own business, said Roy Seiders.

“We would run around the trade shows … And I think, more than anything, being with Dad exposed us to small business, wearing all the hats, all the function areas in the business, and then [trade shows] exposed us to … the fishing-tackle industry.”