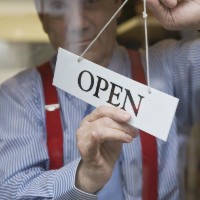 More than 70% of medium-sized Australian businesses expect their business revenue to increase over the next five years, according to research published this week by Bankwest.

With business confidence bouncing back after the May federal budget, the second instalment in Bankwest’s Future of Business research series, which collected information from 85 individuals in mid-sized businesses with turnover above $1 million, shows the majority of medium-sized Australian companies are optimistic about the next five years.

However, the outlook of the firms was less positive in the short term, with respondents reporting they are predominantly concerned with cash flow over the next 12 months.

Bankwest chief economist Alan Langford told SmartCompany the results of the survey are consistent with other economic indicators.

“Considering the study was done in April just before the budget, there would have been some anxiety there and a little after the budget as well,” says Langford.

“Business confidence and conditions were a little shaky … but it has stabilised and there has been improvement in the last few readings,” he says. “Importantly, business conditions are catching up with confidence.”

Langford says differences between short and long term expectations are to be expected, but “forward-looking companies and entrepreneurs are looking at the challenges and opportunities over the medium term”.

In terms of what is driving the optimism among mid-market companies, Langford says the Australian business community is “inherently quite optimistic”.

“For all the doom and gloom … these are just possibilities that may or may not crystalise,” says Langford, who says there is currently speculation the Australian currency is overvalued and will “come off the boil” over the next five years, which is also likely to be playing a part in the longer term expectations of companies.

While Langford says there are often reports about the future of China, he says the country will continue to play an important role in Australia’s economic future, although the mix of products it imports from Australia will shift over time.

“The composition of China’s growth is going to change,” he says. “They might not need so much iron ore but they will need goods and services.”

45% of the companies that participated in the study said they are planning to borrow money in the next 12 months to fuel the growth of their companies.

Respondents from companies considered to be the leaders in their markets were the most likely (24%) to consider borrowing funds to grow their companies in the next 12 months. Just under 30% of respondents said they would seek funding for working capital, while around 15% said they would focus on paying down an existing loan.

It’s something Simon Wan, chief executive of the StayWell Hospitality Group, also sees as contributing to optimism among medium-sized companies like his. As the operator of the Park Regis and Leisure Inn hotel chains, Wan says the last time he saw such favourable conditions for new hotel development was in 2000 before the Sydney Olympics.

“For the past 12 months we’ve seen a lot of extremely positive developments in the hotel development sector,” Wan told SmartCompany.

Wan says there is strong demand for new hotels in most capital cities, and his group will be focusing on adding five new hotels to its 15-strong chain over the next two or three years.

The StayWell Group’s hotels are predominantly located on Australia’s east coast, but Wan says he is looking at new developments in Adelaide, Canberra, Perth and Darwin.

But like many of the survey respondents, Wan says high operating costs in Australia are a challenge.

“Australia has one of the highest labour costs, as well as pretty onerous penalty rates,” says Wan. “So to be successful, you have to be extremely cost conscious.”

After labour, Wan says energy represents the groups largest cost, and he has seen these costs almost double over the past two years. “It’s hard to pass that on to the consumer, especially for a smaller group,” he says.

“Certain state governments, in New South Wales and Victoria, are doing the right thing and we’re asking for governments to build the infrastructure and we’ll do the rest,” he says.