No comedy in this Greek tragedy: Cafe cops it over “What do you give a Greek with a scratchie?” sign 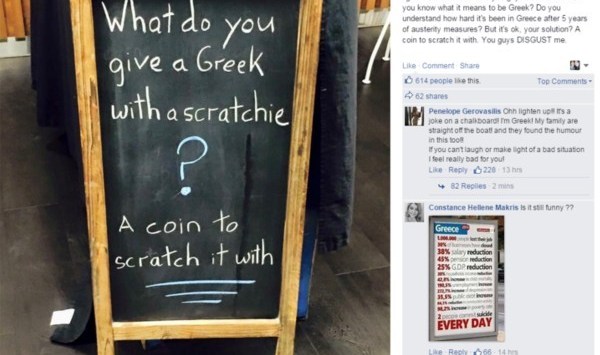 Customers of a cafe in Sydney’s north have taken to social media to complain about a sign making light of Greece’s financial situation.

As Greece shut its banks and stockmarket and defaulted on its loan, Zealous cafe tried to have a laugh with a chalkboard sign.

The sign, which was displayed outside Zealous yesterday, said “What do you give a Greek with a scratchie? …A coin to scratch it with.”

The joke wasn’t taken well by some, with one unhappy customer taking to the cafe’s Facebook page demanding an apology, asking the cafe’s owners if they “understand how hard it’s been in Greece after 5 years of austerity measures”.

Angus Mclellan, managing director of Zealous Hospitality Group, told SmartCompany the chalk board was “humour more than anything”.

“We have three Greek staff members that work for us…they were just taking the piss out of their own country.”

Catriona Pollard of CP Communications told SmartCompany businesses need to take into consideration the opinions and situation of their customers at the moment.

“We need to understand that it can go beyond the chalk board,” she says.

Pollard says while many businesses wanting to advertise may attempt to take advantage of the news cycle – a concept known as “news jacking” – a company’s target consumer needs to be considered.

“News jacking only works if the sentiment is positive,” says Pollard. “Even if you might think it’s fun or topical, you need to think about the consequences.”

Pollard recommends Zealous should apologise if it has upset a significant amount of people in its community, suggesting the businesses’ opinion might not be the same as its customers or clients.