Online entertainment to eclipse TV within a year: study 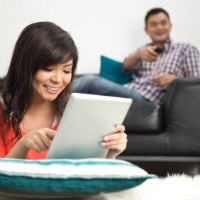 SMEs should direct their marketing dollars towards digital advertising, according to researchers, as a study released this week shows the internet is likely to eclipse TV as the preferred source of entertainment in the coming year.

The Deloitte Media Consumer survey shows while TV is still the number one entertainment choice of respondents, with 64% ranking it in their top three preferences, using the internet for social or personal reasons is a close second (63%), climbing 10% year-on-year for the past three years.

The research predicts if this rate of growth is maintained, the internet will overtake TV as the preferred source of entertainment this year.

With streaming services vying for position in Australia, the research also shows a quarter of those surveyed are planning to subscribe to an online TV service.

Deloitte partner Clare Harding told SmartCompany that the research shows that while it is important for SMEs to spread their marketing across different mediums, it is vital to acknowledge the growing influence of digital media.

“While it shows traditional media such as TV is still highly influential, there are more things in the mix now other than mainstream media,” says Harding.

Harding says one of the most important aspects of the research for SMEs to takeaway is the importance of social media. More than half of those surveyed (54%) said they update or check social media daily, checking anywhere from one to 20 plus times a day, up 170% since last year.

“That’s an interesting shift for the marketing world,” says Harding. “That is an important trend to consider when looking at influence people’s buying behaviour.”

She says the research has also shown online reviews or recommendations from someone within your social media circle are as influential on buying decisions as television advertising.

Interestingly, the opinions of strangers are also growing influences on product buying habits.

Harding says that while digital advertising is potentially less expensive than traditional media and therefor more accessible to SMEs, it is also potentially more challenging to measure because there is less feedback.

“It is potentially more complex, but offers more opportunities to small and medium sized enterprises.”