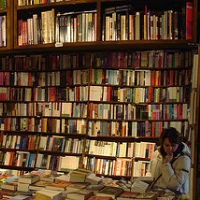 Fancy patting a pug or dressing up as your favourite character while browsing for a book? These are just some of the many innovative techniques bookstores around Australia will be using to lure customers this Saturday for National Bookshop Day.

Joel Becker, chief executive of the Australian Booksellers Association, told SmartCompany the day was established four years ago after Nick Sherry, the small business minister at the time, predicted there would be no physical bookshops left in five years except for specialist shops in capital cities.

“We are certainly adjusting with technology but we serve a really important role in the community. We’re in the business community but also the creative and cultural space and we wanted to celebrate that with our customers.”

Becker says for some stores National Bookshop Day will be about simply getting people to come into the store and say hello, while others will focus more on driving sales.

“It’s a positive day,” he says. “It’s good to have one day where you have a party and get the word out of all the good things that bookshops are doing. And of course we would love for there to be a nice bump in sales on the day.”

Fiona Stager, co-owner of Avid Reader Bookshop in Brisbane, says pug owners will be encouraged to come into her store for Saturday’s celebrations. They can then choose to get their photo taken with their pug’s “favourite book” for a 10% discount.

“I wanted to appeal to that younger demographic without really saying it’s for hipsters,” Stager told SmartCompany. “One of my young staff brought in their pug the other day and I said ‘let’s do that’.”

Stager said she is really happy to be going ahead with something that is a bit different because it will help the bookstore stand out.

“The media have really picked up on it,” she says. “It’s really quirky, and from a marketing perspective it doesn’t cost me anything.”

Stager says from a small business point of view, her National Bookshop Day campaign ticks all the right boxes.

Louise McNally, events coordinator at Dymocks Melbourne, told SmartCompany the Collins Street store will also be taking a quirky approach in order to encourage customers to come into the shop and spend money.

“We’ve got about 30 cosplayers to dress as favourite book characters and book-to-movie characters,” says McNally.

“We also have 25 youth theatre people coming in to do readings, performances and poetry.”

McNally says getting people to come into the store and dress in costumes has worked well in the past because children love it.

“It is so well received,” she says. “It’s a great thing for young kids. I think there’s a really huge movement through fan bases for cosplaying for older people as well.”

As well as playing dress-ups for National Book Day, Dymocks will be raising awareness for the Indigenous Literacy Foundation and will host several authors and illustrators in-store.

“It completes the circle of interaction within the reading and writing community,” McNally says.

“Authors and illustrators are real behind-the-scenes workers and for them to actually come up front and centre and interact with fans who often don’t even have a face to put to the words – I think that brings so much joy to young people.”

Peter Ingram-Jones, events manager of Fullers Bookshop in Hobart, says this National Bookshop Day he will be placing a couch in the middle of the store and encourage people to come in and read their favourite books. Customers will also be encouraged to bring along a gold coin donation for the Indigenous Literacy Foundation.

“Literacy comes first,” he says. “It is usually pretty busy, so we hope to have a bit of a buzz in the shop and hopefully there’ll be lots of kids around.”