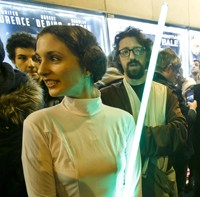 Diehard Star Wars fans are not the only ones to be delighted by the release of The Force Awakens.

Retailers are cashing in on the latest instalment in the popular filmfranchise, according to research published yesterday by point-of-sale software company Vend.

The research shows Australian retailers that are selling Star Warsproducts and memorabilia have seen, on average, a 202% increase in their December sales so far in comparison to this time last year.

Read more: Four of the quirkiest Star Wars products to hit the market

Jason Philactides, vice president of sales for Vend in the Asia Pacific, told SmartCompany you don’t have to be the wisest Jedi in the galaxy to realise retailers are cashing in on Star Wars: The Force Awakens.

“Retailers like Target and Toys “R” Us are doing really well,” Philactides says.

“They’re seeing about 1000% growth [in the sales of Star Warsmerchandise] over this period. Then we’ve got other stores that are also product-heavy, for example just promoting merchandise in their store. Gaming stores and gift stores are seeing a nice little increase.”

For example, one of Vend’s customers is offering shoppers a 10% discount just for showing their movie ticket for the new Star Warsfilm.

“It’s a clever way to go and a really savvy and cost-effective way to drive consumers into your store or online,” Philactides says.

“Whether you’re selling games or clothing, anything you can do to create some hype about your store in conjunction with blockbusters can only be a positive thing. Having real campaign-driven strategies is what consumers are looking for.”