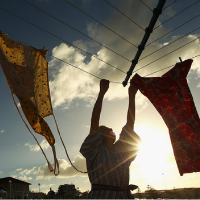 You don’t have to search far and wide to learn that Australia is home to a wide range of inventions that have saved lives or simply made our existence a little more comfortable.

While government bodies such as the Commonwealth Scientific and Industrial Research Organisation (CSIRO) are responsible for some of these inventions, many have been developed by Australian businesses.

With Australia Day right around the corner, we thought it was appropriate that these weird, wonderful and downright clever inventions get the attention they deserve.

With this in mind, here are seven of SmartCompany’s top Australian inventions.

Think there’s something we’ve missed from the list? Let us know in the comments below.

It’s often a myth that entrepreneurs find success overnight, but that’s exactly what happened when father-son team Stuart and Cedar Anderson turned to crowdfunding last year in order to get their invention off the ground.

Within a matter of minutes the pair had hit their $US70,000 target, going on to raise $15 million within a few weeks.

The Flow Hive is essentially a type of beehive that allows people to retrieve honey by simply turning on a tap.

The invention is aimed at casual beekeepers as well as experts and has customers in more than 140 countries.

Today, the Andersons are enjoying much-needed family time as well as catching up on outstanding orders.

Wi-Fi technology was patented by the CSIRO back in 1992.

Today, you’d be hard-pressed not to find a cafe offering its customers free wireless internet.

The iconic Hills Hoist was first sold in 1945.

Since then, the South Australian company that bears the same name has branched out from manufacturing clotheslines.

In fact, it no longer makes the clotheslines that made it famous, after signing an exclusive license deal with Woolworths.

After 70 years Hills Hoist is focusing on technology and communications solutions for homes, hospitals and schools thanks to a partnership with the South Australian government.

South Australia definitely pulls its weight when it comes to great Aussie inventions.

Cask wine was invented in SA and celebrated its 50th anniversary last year.

It was patented in 1965 by winemaker Thomas Angove and hasn’t changed much to this day.

The software behind Google Maps was also made in Australia.

Danish siblings Lars and Jens Rasmussen settled in Sydney after a stint in the United States.

While in Sydney they founded a mapping startup, which they sold to Google in 2004 while also joining the tech giant.

Developing Google Maps in Australia resulted in the pair being named New South Wales’ Entrepreneurs of the Year in 2010 for the role they played in highlighting Australia’s IT industry.

Polymer banknotes were first developed by the CSIRO in conjunction with the University of Melbourne and the Reserve Bank of Australia.

They were first adopted in Australia in 1988, with paper money phased out entirely in 1996.

Polymer banknotes are harder to forge and are much better for the environment because they last longer than money made from paper.

His invention? A type of washing peg that comes with a hook so people can hang their dresses and underwear.

Boocock began selling his products back in 2013 and these days is focusing on overseas markets, having already snapped up deals in England, Ireland and Scotland with Aldi.