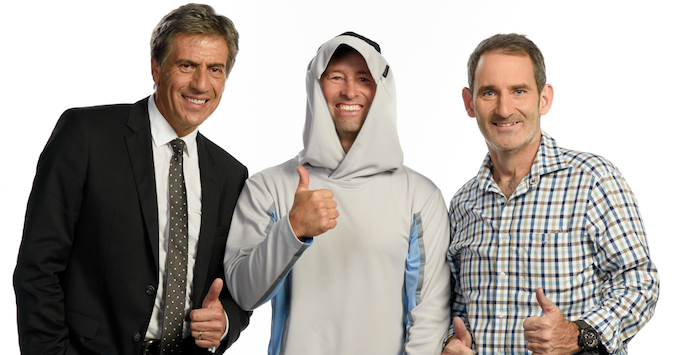 Bernie Sharrad is hoping to reduce the incidence of skin cancer worldwide with CapHat, a detachable cover for a cap or hat that provides full sun protection.

Appearing on Channel Ten’s Shark Tank last night, Sharrad negotiated his way to two $60,000 loans from sharks Steve Baxter and Andrew Banks, with Banks having a future option to take a 15% equity stake in the business.

This money will only be available when a large purchase order of CapHats is organised, something that Sharrad is working very hard towards.

“We’ve been slowly building as a business,” Sharrad told SmartCompany.

“I do find it difficult being a dad at home and having to ring people to seek orders all by myself.”

Putting it all on the line for his business, Sharrad told the sharks he has mortgaged his house and has not yet taken an income from CapHat’s sales.

Sharrad has also developed a hoodie with a built in CapHat, hoping to appeal to younger markets.

Working on the business for over 18 months full-time, Sharrad says he went on Shark Tank because he’d gone “as far as I could.”

“There’s only so far you can go on your own, we needed that funding,” he says.

Three of the sharks dropped out after hearing about CapHats relatively high manufacturing costs, which are the result of Sharrad wanting to keep production local.

Since the pitch, he says the costs have been lowered to a figure closer to the sharks’ desired $3, but it’s not quite there yet.

“I looked at manufacturing in China, but we want to keep [CapHat] at a UPF 45 rating, and their material quality wouldn’t allow that,” Sharrad says.

“Steve linked me to a winner from last year, Tracy from Rescue Swag, and she connected me to a Fiji based manufacturer who’s been great.”

Sharrad has also found customers have been much more responsive to Fijian-made goods, escaping some of the stigma associated with Chinese products.

As CapHat is yet to fulfil a large retail order, Sharrad found the Chinese bulk ordering method did not work for his company.

“I would love to place an order for 10,000, so I’m working hard on new retail and online contacts,” he says.

“If we can obtain such an order Andrew and Steve’s offer will come into play.”

Although Sharrad says he was happy to secure the $120,000 joint loan from Banks and Baxter, he believes the business could have expanded more with an equity investment.

“They didn’t show this on the pitch, but I had plans for exhibitions so we could get more exposure,” Sharrad says.

“I know we could sell more, it’s just the funding is lacking.”

Since pitching to the sharks, Sharrad has been exploring overseas expansion, and received a prestigious Edison Award in April this year.

“We received an Edison Award for innovation in New York a few months ago, and that’s really given us the confidence to keep going,” he says.

“We couldn’t really believe it, Andrew came along and there were people like NASA and Cisco there, I felt so humbled in their company.”

CapHats target market of fishing and outdoors is made up of about 7 million customers in Australia, but he estimates there are over 40 million in the US alone.

The product is stocked in over 20 fishing and outdoors stores across Australia, the largest of which being Aussie Disposals.

Despite this, Sharrad says the target market is “realistically much bigger”.

“I’ve had interest from areas like lawn bowls and tradespeople,” Sharrad says.

“I used mine the other day to mow the lawn, so there’s definitely potential for the product.”

For hopeful entrepreneurs trying to start up like Sharrad did, he says to keep in mind you “don’t know what you don’t know”.

“Use your network to talk to people, never be afraid to ask,” he says.

“It’s been an absolutely incredible ride, who knows where it’s going now.”