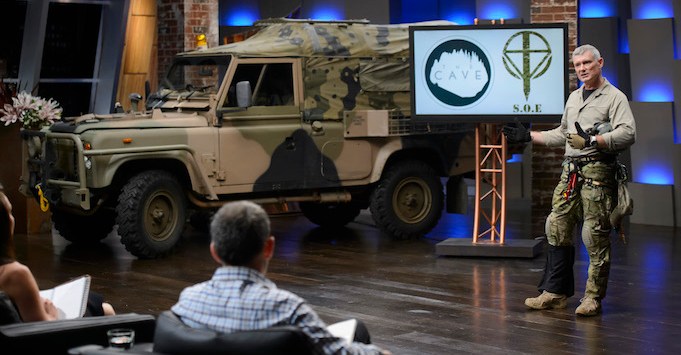 Last night’s episode of Shark Tank saw some of Australia’s leading investors perform squats on national television and even ride a bike.

But the fun and games were put aside when it came down to what really mattered: the money.

This week’s episode saw Queensland investor Steve Baxter team up with another shark to invest in a fledgling company not once, but twice.

One of the lucky businesses was The Adventure Group, an outdoor adventure and team-building company founded by ex-special forces officer Michael Donaldson.

The Adventure Group is based in Queensland and at the time of filming was valued at $500,000.

Donaldson stepped into the shark tank with a pitch that asked for a $100,000 investment in exchange for 20% equity.

Speaking to SmartCompany, Donaldson said he is really happy two sharks came onboard.

“The sharks were very respectful and treated me very well compared to others,” Donaldson says.

Donaldson runs The Adventure Group with his wife Nicole, who he describes as the “brains of the outfit”.

The business counts large corporates among its clients and this year has its eyes set on Sydney and Melbourne.

“The rest of 2016 is to roll out across the eastern seaboard and also enter into Tasmania by the end of the year to take advantage of the cooler weather down there,” Donaldson says.

“Being outdoors, it gets pretty hot.”

Through its planned expansion, The Adventure Group also hopes to provide veterans transitioning back to civilian life with employment. This is because their skills are perfect for the job at hand, says Donaldson.

“The nature of the business we’re building is ideally suited to people from my background,” he says.

“Quality assurance is also really easy because they’re all self-motivated and strive for excellence.”