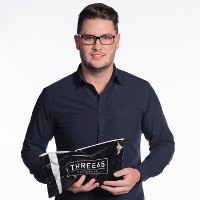 Will Strange makes his pitch on Shark Tank

Shark Tank judges Naomi Simson and Janine Allis now own 25% each in a company that delivers underwear and socks to people’s homes every three months.

The founding director of RedBalloon and founder of Boost Juice last night teamed up to take a 50% stake in Three65 Underwear, a subscription-based e-commerce business with around 280 subscribers, mainly men, who each receive a fresh pack of underwear and socks every three months.

But like other entrepreneurs who have pitched to the sharks, Strange ended up handing over much more than he had planned.

Strange went into the tank asking for $60,000 for a 15% stake in Three65 but both Simson and Allis said 15% was not enough. The sharks were concerned about Strange’s ability to commit fully to the business, given he also owns and operates a GPS business called Sports Performance Tracking.

The fact that Strange also has another business was the deal breaker for sharks Steve Baxter, Andrew Banks and John McGrath too.

But Strange agreed to relinquish more equity in his company and speaking to SmartCompany he says it is worth it for the mentorship he will receive from Simson and Allis.

“Three heads are better than two,” he says of the partnership.

While due diligence on the offer was completed in February, Strange says the trio are still finalising some aspects of the deal.

Strange admits he always wanted to be a business owner and the idea for Three65 was inspired by successful e-commerce subscription models in the US.

“A couple of years ago now I was working in a construction company but I always wanted to do my own thing,” Strange explains.

“I was watching the success of businesses like the Dollar Shave Club that use a subscription model and realised it had been done overseas really well but it hasn’t been done that well here.”

Strange mentioned the idea to a mate over lunch who told him he would invest if Strange ever set up the business. He says a “couple of other mates had the same opinion” and the rest is history.

Strange says he is a “massive US Shark Tank buff” and so the decision to try out for the local version of the show “made sense”.

“It was a fantastic opportunity to get in front of the right people, as well as a great advertorial for the brand,” he says.

Simson told SmartCompany she was impressed by Strange’s energy.

“He is clearly passionate and a go-getter, the type of person who will get their teeth into something and just keep going,” Simson says.

But it is the business model he has developed that really piqued her interest.

“I know of some very successful subscription models in the US, including one called Sox,” Simson says.

“All they do is black socks. It is a very simple model and I think there is a real opportunity for a subscription-based basics type of program in Australia.”

Simson believes Strange has found a “nice little niche” and says he has “worked hard on pricing”, striking a balance between good quality products that are not too exclusive.

Strange says he has been working closely with Simson on improving Three65’s e-commerce platform, while his conversations with Allis have been about strategy for the brand and “trying to get people to buy into the story”.

Cross promotions between Three65 and RedBalloon and Boost Juice are already in the works and Simson says there are plans to target other consumer groups outside of Three65’s current male customer base, including mums and partners who might consider buying subscriptions as gifts.

Reflecting on his time in the Shark Tank, Strange says the one piece of advice he would give to other entrepreneurs is to “know your numbers”.

“We’ve seen a lot of people on the show previously who don’t know their numbers but it is your own business,” Strange says.

“It’s like not knowing your kids. You can’t operate [a business] without it.”

“Just be truthful and honest and put everything on the table … [the sharks] are not out to hurt anyone, they are there to help.”