Shark Tank recap: Why Flybabee co-founder Emma Lovell parted with a third of her business for a chance to work with Janine Allis 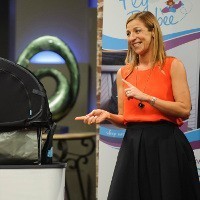 When Emma Lovell pitched her business to the judges on Shark Tank she asked for $50,000 for 10% of Flybabee, a company that designs and manufactures pop-up canopies for airline bassinets and baby strollers.

But Boost founder Janine Allis had a different idea. Last night Allis offered Lovell $100,000 for 50% of the business Lovell started with her husband Phil three-and-a-half years ago.

“The reason is what I can give you is the business knowledge I have,” Allis told Lovell.

“Together I think we could make a real business of this.”

Fellow sharks Andrew Banks and John McGrath urged Lovell to accept Allis’ offer, with Banks calling it a “moment of truth” for Lovell. Both Banks and McGrath said Flybabee would benefit from Allis’ sales, marketing and finance skills.

But parting with half of her business was a step too far for Lovell, who countered Allis with an offer of 25% equity, only to be told by the shark it wasn’t enough. The pair eventually settled on a deal for 38% equity with a 3% claw-back provision, but Lovell told SmartCompany this morning the deal was “tweaked” during the due diligence phase.

Lovell had already invested $100,000 of her own money in getting Flybabee off the ground, going through a number of homemade prototypes before finding the right, professionally made model.

She admits she was at her limits in terms of financing before appearing on Shark Tank but with Allis’ investment secured, it is now full steam ahead.

The first Flybabee products will be on sale within weeks – the latest shipment held up by the recent storms in Sydney – and Lovell has had a number of planning days with Allis to help create a vision for the company.

“I think there will be a lot more strategising with her than there was without,” Lovell says, explaining the “business download” day she had with Allis recently. The day involved answering plenty of general questions about the business, including where Lovell wants to take the company and if she could define the product in one sentence.

“When you are starting out you get so focused on a product,” Lovell says. “It was really cool to stop and think about a vision.”

While Lovell says the extra cash will make a difference, especially as her products hit the market, the mentor she has found in Allis will be even more valuable.

“It’s someone to ask questions more than anything,” she says.

Allis told SmartCompany this morning Lovell has already been making good on that promise, asking plenty of questions and constantly working on overcoming her challenges. For Allis, the product ticked the boxes and so did Lovell.

“You’ve got the person, the product, I think the price is in line and we’re working hard on promotion,” Allis says.

Allis says Flybabee is still in its infant stages – “it’s as tiny as you get” – but Lovell is on a quest to find a solution to the problems associated with travelling with children. And with big box retail, online sales and opportunities to expand internationally, the market is there for the products.

“What people don’t see is [the sharks] spend an hour-and-a-half with someone so we get a really good feeling for the type of person they are,” she says.

Lovell says the idea behind the Flybabee products came to her after travelling back and forth between the UK and Australia with her young daughter when a family member was sick. She looked everywhere for a product she could buy to help her daughter sleep on the plane but when she found nothing, she knew she wanted to “make it easier for parents”.

Her advice for other entrepreneurs who think they have found a problem that needs a solution is to do their research and “don’t make assumptions”.

“Make sure other people see a problem as well,” she says.

“Don’t be afraid to jump in. I didn’t know anything about manufacturing or retail but there are so many resources at hand. And if you see someone with the skills you need, ask them questions. You’d be surprised about how generous people can be.”