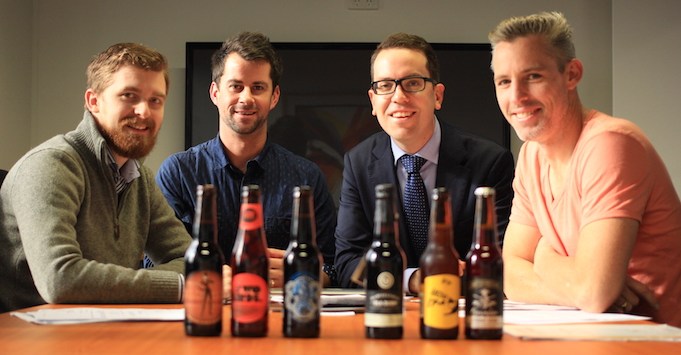 A startup that delivers cold beer to people’s desks landed a $25,000 investment deal with Steve Baxter on last night’s episode of Shark Tank.

While some of the other sharks were impressed with a business idea that taps into the tradition of Friday work drinks – Andrew Banks said he will even likely become a customer – it was Baxter who did a deal for a 10% stake in the business.

Now that the investment has been made public, Friday Beers – which launched in Brisbane 12 months ago – has plans to ramp up its expansion in Sydney and Melbourne.

The alcohol delivery service, which specialises in craft beer but is looking to expand its product range, makes around 50 deliveries in Brisbane every week.

The aim is to lift that figure to around 1000 deliveries across Brisbane, Sydney and Melbourne by the end of the year.

Co-founder Lee Mathers told SmartCompany pitching to the sharks was one of the most confronting moments of his life. .

“It’s one of the most up and down experiences I’ve had in such a short period of time,” Mathers says.

“What you see on TV is an edited-down version. The rollercoaster you go on for the 45 minutes to an hour when you’re there is just crazy – especially not having met any of them except for Steve once, very briefly.”

“They are legitimately grilling you to see if you know your business inside out and if it’s got the potential to get to where you saying it’s going to. They can see through bullshit a mile away.”

However, Mathers had did have one trick up his sleeve: bringing cold beer onto the set.

“I reckon the thing that got us over the line with Steve was he had a beer there ready to drink,” he says.

“Glenn Richards really enjoyed his drink as well. Naomi [Simson] and Janine [Allis] weren’t too happy we only had beer and not cider on us, but everybody ending up having a drink.”

The due diligence stage is still underway, according to Mathers.

“It’s surprising how long this stuff can take,” he says.

“Steve’s got a great team behind him, but for a 12 to 13 week season, he’s invested in a lot of companies. So there’s a lot of due diligence to be done.”

Two other deals were done in the tank last night, including the largest investment of the series so far.

In that deal, Janine Allis took a 35% stake in Paleo Cafe, a chain of franchised cafes that specialises in wholefoods. While founder Marlies and Jai Hobbs originally asked the sharks for $750,000 for a 10% stake in the business, Allis negotiated to take a great shareholding in the company for the same price.

Allis also landed an investment in Body Peace, a range of clothing made from bamboo, in partnership with Baxter. The sharks offered founder Anna Walsh a combined total investment of $180,000 for a 30% stake in the business, which was double her original pitch.

Pitzstop, a business that sells disposable armpit guards for people who experience excess sweating, missed out on a deal with the sharks.

Interesting insight of the Shark Tank process. I suspected that there was some due diligence afterwards. I wonder how many don’t stack up.