Small chocolate business revamps the Polly Waffle: “We realised it is something we could do as a small business” 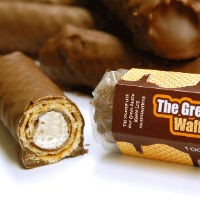 Fans of the long-lost chocolate bar the Polly Waffle are in luck – a small business in Victoria is about to relaunch its own version of the former Aussie favourite after identifying a huge fan base for the confectionery product via social media.

To be released later this month and known as the Great Aussie Waffle Log, the chocolate bar is the creation of the Chocolate Works, a small chocolate factory based in Dingley, Melbourne, with a staff of eight and a turnover of about $600,000 to $700,000 a year.

Nestle’s Polly Waffle went out of production in 2009, with the maker citing poor sales as the reason.

Chocolate Works managing director Graeme Bulluss told SmartCompany this morning the idea for a revamped version of the chocolate bar was born after he heard about a number of major confectionery and junk food companies discontinuing once-popular confectionery lines.

Bulluss says he was constantly hearing about products “dropping off” in the news.

“We decided we wanted to try and recreate some of the lost confectionery of days gone by,” he says.

“It’s such a shame to lose Australian manufacturers.

“We understand that for a big company like Nestle to keep selling (such products), it needs to be selling in high volumes.

“We realised it is something we could do as a small business.”

Bulluss began doing some research and stumbled on a popular ‘Bring back the Polly Waffle’ group on Facebook, a group launched by a Monash University English teacher with about 30,000 followers at the time.

“It was a ready-made market,” he says.

“The Facebook page was the stimulus for it, at least 30,000 people wanted it.”

The next step was to create a recipe similar to the original Polly Waffle, Bulluss says.

“It’s a simple product with three components; chocolate, marshmallow and a wafer,” he says.

“We tried to track the original down but found it difficult because Nestle stopped manufacturing it seven years ago.”

The company found some photos online, started experimenting to get the ratio of components right and began sourcing the components from suppliers.

“This is the first time we’ve tried something like this,” Bulluss says.

“We’ve been in the business nearly 16 years, and specialise in customised chocolate, but this is something new for us.”

Bulluss believes there are plenty of opportunities for other small business to take advantage of such markets, in particular for the area of fast-moving consumer products.

“There’s a critical level the big players need to be at, once demand drops below that there are great opportunities to take up,” he says.

As for future plans at the Chocolate Works to revamp other lost confectionery items, Bulluss says he will wait and see.

“We have no firm plans yet but have been given a lot of good ideas which we will probably run with them in a few years; we’ll let this one bed down first.”