He’s the co-founder and chief executive of tech heavyweights Square and Twitter but Jack Dorsey has a keen appreciation of what it takes to run a small business.

He also understands that while most businesses want to grow, growth can mean different things for different businesses.

Dorsey was speaking at a Square event in Melbourne last night with the owners of three small businesses: Dan Chrystal from Stand Up Café, Matt Thomson from Matt, and Lauren Davie and Elena Andoniou from Those Girls.

Each of the business owners described how they want to continue growing the size or scale of their businesses but Dorsey explained what he described as an “alternative point of view”, which comes from his mother.

“I’m from Missouri and my mother had a coffee store when I was growing up as a kid and from the age 11 to 15, I worked at the coffee shop,” Dorsey told the audience.

Dorsey said it took him a long time to realise what this meant to his mother and it’s now something he greatly admires.

“My mum was someone who didn’t want to go reach, she wanted to go depth in her community and … to deepen the relationship. That’s another form of growth.”

Why Dorsey is backing small business

Dorsey is in Australia for the first time to meet with local small businesses that have signed up to use Square Reader, his company’s mobile payment device.

Square introduced the debit and credit card reader in Australia in early March, having rolled out its dashboard app in Australia in July 2015, and the device is now stocked in close to 500 Officeworks, Bunnings and Apple stores across the country.

The Square Reader retails for $19 and all card transactions attract a processing fee of 1.9%, with businesses receiving deposits from Square into their bank accounts the following business day.

“Australia has always been interesting to us as a company because we have known it to be a market and nation of entrepreneurs, people who take risks, who use technology to make lives better and to focus on what’s most meaningful to them,” Dorsey said.

While Square is now valued at more than US$5 billion, Dorsey said the idea behind the global payments company was born out of a everyday problem.

“It’s been seven years of building this company and it goes back to a very simple story – my co-founder Jim McKelvey could not sell a piece of glass art because he could not accept a credit card,” he said.

“That’s how we got started, we decided we would build a reader … and figure out how to link up with the financial industry, [and] figure out everything we needed to know about credit cards and moving money around.

“We learnt everything from scratch and in doing that we were able to be creative and really focus on what I think is one of our core attributes, which is speed.

Dorsey said small businesses make up more than 60% of the global economy, but their economic contribution is often overlooked.

“We often put a … magnifying glass [to] and hear about the larger businesses of our world but what is really driving the world are the … small businesses and the folks who start with nothing and grow into something really beautiful,” he said.

“That’s who we support and that’s why we’re here and we’re excited to be in Australia.” 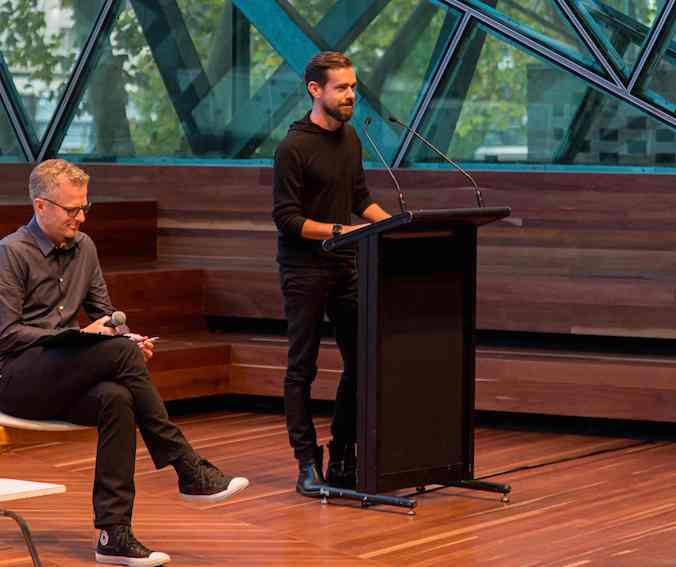 Dorsey told the attendees at the event the other thing he loves about small business and entrepreneurs is “they’re not afraid to admitting failure [and] not afraid of admitting mistakes”.

When quizzed about how his business journey started with Twitter, Dorsey described a path that centered on education.

“I did not start out to start a company,” he said.

“It was more that I was really fascinated about something we had that we wanted to develop and we wanted to see and use. And my approach … was [to ask] ‘what was the thing I needed to learn to unblock me for the next step’.

A pattern of incremental learning goes back to his childhood, Dorsey said.

“I never wanted to be an engineer when I was a kid, never wanted to program, but I got a computer and I knew I could do something interesting with it so I learnt the bare minimum to start drawing on it,” he said.

“[Twitter] was something we wanted to use so we’re learnt what we needed to build it. It turned out we had a business.

“That was our approach with Square as well,” he added.

“We learned everything necessary to do it and then we brought it to people and we learnt from them.”

the Square guys are the most arrogant bunch of idiots on the planet. They’re like Xero – absolutely condescending and think they’re the center of the world. Jack left Twitter because failing. He’ll soon leave Square once it fails as well. Another average company burning investors money big time in the next few years.