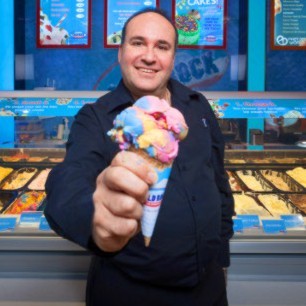 The new stores represent the first foray into global markets for parent company Franchised Food Company and chief executive Stan Gordon is hoping the ventures will give his $50 million retail group a boost.

Speaking to SmartCompany from Vietnam, Gordon says the international Cold Rock and Pretzel World stores will be operated by master franchisors in Vietnam and the United Arab Emirates and their local knowledge will be the key to success.

“As a migrant to Australia, I know that local people have the local knowledge,” says Gordon, who emigrated from South Africa to Australia in 1996.

“You need a local influence and the local culture.”

The first two Vietnamese Cold Rock stores will open within days, with two more stores to follow in the new year. The stores will be supplied by a central manufacturing operation, using Australian milk and manufacturing technology.

“The ice cream will be made in Vietnam by Vietnamese but with Australian technology and ingredients,” Gordon says.

Gordon says his decision to start Franchised Food Company’s international expansion in Vietnam came about after a “chance” visit to the country in December last year.

“I was on a personal holiday to Vietnam and I said to my wife, ‘in this country, it will work’,” he says.

Following the holiday, Gordon was approached by a Vietnamese national, whose partner operates a number of businesses in Darwin, who asked him if he was interested in a joint venture.

“I jumped at the opportunity,” he says. “I thought, ‘this is perfect’. All the stars aligned, it was meant to be.”

Gordon sees Vietnam as a “springboard” to take the Cold Rock brand into other countries, particularly in the Asia-Pacific region, picking out Indonesia as the next possible site of expansion.

“It is relatively close [to Australia], it’s just up the road. And it has an aspirational middle class with the right sort of disposable income.”

Gordon admits the country has adjusted the “taste profile” of Cold Rock to appeal to Vietnamese shoppers, which he says is just one of the challenges of taking a food product global.

The other challenge has been the language barrier in Vietnam. But Gordon says international expansion is possible for any company that takes time to understand the local market.

“You absolutely have to do your homework first,” he says.

“And you have to be prepared to make mistakes. It’s a learning curve.”