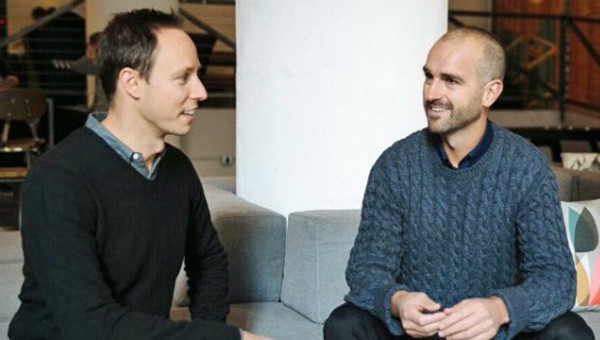 Two Australian entrepreneurs say they have learned three key things during their time with Richard Branson and two visits to the influential entrepreneur’s private island.

Justin Brown and Mark Bakacs, the co-founders of startup Ideapod, are on the verge of visiting with the Virgin CEO’s island for a third time after Branson personally endorsed their ideas-sharing platform in a blog post in August last year.

“Richard is very enthusiastic about the mission of Ideapod to build a social media platform for sharing ideas, and he has used it to crowdsource ideas,” Brown tells StartupSmart.

“Richard loves the idea that companies can use Ideapod for genuine engagement with staff and customers – to get feedback on what people really feel – the best ideas for new products and new policies can come from anywhere within a company, and only in a small number of cases do they come from the top.”

Branson’s backing has helped the pair secure $3 million in funding for the startup and introduce a new product, Capture – an app allowing users to capture their ideas in 40 second videos.

“This has opened up a whole range of opportunities with investors who want to invest in enterprise solutions and we really have Richard Branson to thank for that,” Bakacs tells StartupSmart.

The pair has taken away three key lessons from their time with Branson.

1. Don’t take it too seriously

“His most important message was that business should be fun,” Brown says.
“He infused fun into everything he does and we try to do the same at Ideapod.”

2. Look after your employees

It’s also important that this carriers through to a company’s staff.

“Richard also emphasised how important it is to treat your staff well,” Bakacs adds.

“They are your greatest asset and must be having fun too.”

“We were inspired by Richard to keep thinking big,” he says.

“He has always sought to disrupt industries by providing better customer service. Richard was encouraged by the expansive mission of Ideapod to build a social media platform for ideas and urged us to stick at it.”

Brown says the new Capture app will serve as a notebook of sorts for creative entrepreneurs.

“It’s a very simple and intuitive app for recording your video ideas in a gallery – similar to a notebook,” he says.

“You can keep them for yourself or share them to your Ideapod profile to get feedback.”

Dakacs says the key to securing investment for Ideapod and Capture was the ability to show potential investors traction in the market.

“Early on we recruited a designer and showed design of Ideapod to organisations and got them to sign letters of intent to use Ideapod when it was ready,” he says

“We also built a landing page and got early expressions of interest from users and organisations.

“This enabled us to raise our first seed round and from there we’ve continued to release new versions of the platform and build our monthly active users.”

The Aussie entrepreneurs relocated to the US to find investment and are now based in Los Angeles, but say they are considering setting up a permanent base back home.

“We’re looking at building an office in Sydney or Melbourne given the high demand we’ve seen in Australia with enterprises using Ideapod to crowdsource ideas,” Brown says.

“We visit Australia regularly given our ties here and we have a strong investor base in Australia.

“Australia is a wonderful place for startups – we have quality infrastructure, a highly educated population and a vibrant and diverse economy.

“It’s been positive to see the government embrace startups and innovation and we hope to see this support continue.”

In the long term, the team hope to keep rapidly expanding around the world.

“Since the beginning we’ve always wanted to build a product that people love,” Dakacs says.

“We’d love for Ideapod to continue scaling with more and more people loving the platform.

“In the long term we’d like for Ideapod to be a positive force in improving how we communicate online, helping us to communicate with more intent and authenticity.”

For their own lessons for fellow entrepreneurs and founders, the duo keep it simple.

“You’re the source of your own authority.”