Why these tradies are building their local pub for free 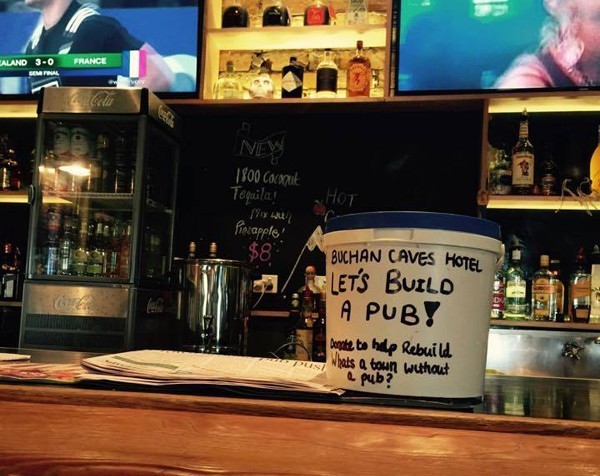 After the local pub in the rural Victorian town of Buchan burnt down, locals were at a loss for where to go for social gatherings and, of course, a cold beer. The owners of the pub chose not to rebuild, but the townsfolk rallied together and undertook a successful $600,000 crowdfunding campaign in 2015 to get the pub back up.

Construction began in late 2015, and to keep costs down, the ABC reports local tradespeople from the Buchan area are giving up their time to lend a helping hand in what is being described as an example of the “value of small businesses”.

Buchan has a population of only 400 people, who were all devastated when the town’s only pub, The Buchan Caves Hotel, burnt down in April of 2014. The town benefits from a steady stream of tourists, who come to visit the four-kilometre long limestone Buchan Caves.

It is this limestone that is currently being used to construct the new walls of the Buchan pub. The new and improved pub is expected to open towards the end of the year.

“Right now, there’s a local man finishing off some of the rockwork on the outside of the pub,” says Jayne Cummings, worker at the Buchan Roadhouse, which sits opposite the construction site.

“We’ve had a lot of local tradie support, Greg King from Buchan Excavations has been doing a lot of digging work, and just general labouring.”

King told the ABC living in a town without a pub has been “awkward”.

“It’s an essential meeting point. During the bushfire season, and whatever else, it’s the central hub. If there’s a funeral or a wedding it’s where everyone comes to.”

Cummings agrees, telling SmartCompany the town has been “suffering” not having that central meeting point, but the residents have been making do.

“Its more than just a place to have a beer, it’s a big social point.”

The Roadhouse has had to accommodate for the lack of regular late night venue in Buchan, adjusting its opening hours for the locals.

“We have seen a bit of an uptick in business, we used to close at 5.00pm but now we’re open much later,” she says.

“The local football club has been running meals on Friday nights to make up for the loss of the pub.”

Cummings is excited to have the pub back open, and says there may be a few improvements.

“I have to say, the old pub had a lovely rock wall, but this one looks much nicer.”

Peter Strong, chief executive of the Council of Small Business of Australia, told SmartCompany the pub’s rebuilding is an example of “the value of small businesses”.

“This is a fantastic example of people coming together for the benefit of the community,” Strong said.

“It really shows the depth we have in Australia when it comes to community.”

“You’ll even see small and medium businesses working together to survive. The medium business might take a hit in profits, but in return they’ll add depth to the community which is good for everyone.”

Strong recalled similar examples of this sort of community behaviour with Australian bushfires, saying “lots of businesses came together to look after each other.”

During the 2015 Lorne bushfires, small business owner Alex Ng was praised for opening his supermarket to fire fighters for supplies.