Uber gets its first Australian competitor as local startup expands to ridesharing: “Uber has had a grip on the market for long enough”

Taxi booking app GoCatch is expanding into the ridesharing market and taking on $US60 billion startup giant Uber at its own game.

Launched in Sydney on Monday night, the GoCar function will be integrated into the existing GoCatch app, allowing users to switch between booking a taxi and using ridesharing.

GoCatch co-founder and CEO Ned Moorfield says it will provide much-needed local competition to the US ridesharing startup.

“Uber has had a grip on the market for long enough.”

THE KEY POINT OF DIFFERENCE

GoCar will operate in much the same way as Uber, with transactions staying within the app and a rating system for drivers and users.

But the startup is banking on one key differentiator: No controversial surge pricing.

“That’s something that people really don’t like about Uber,” Moorfield says.

Instead, GoCar will have two different prices for peak and off-peak times.

According to Moorfield, GoCatch could be between 10-15% cheaper than Uber during surge times but will be “broadly the same” during normal periods.

“When they surge people will really know the difference,” he says.

“For a bunch of people the absence of surge pricing is pretty appealing.”

During these times Moorfield says the ridesharing service will be 10-15% cheaper than taxis, and 20-30% cheaper during off-peak periods. 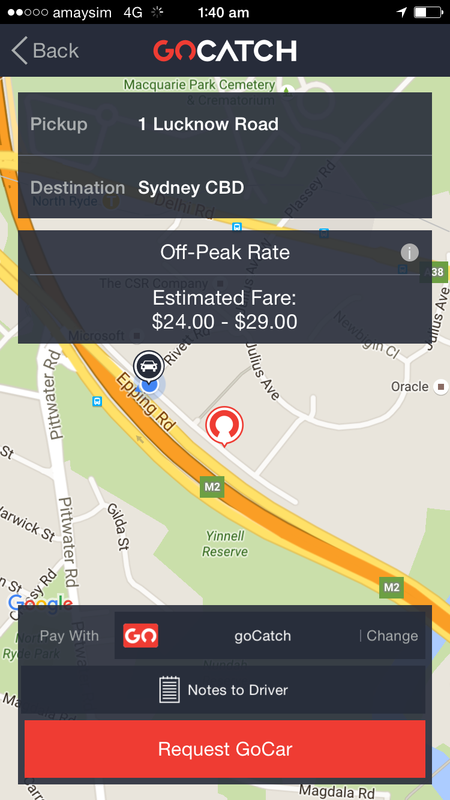 The local competitor is also trying to offer a more enticing prospect for drivers, with payments made daily instead of Uber’s weekly payments.

GoCar will also be taking a 15% commission on all fares compared to Uber’s 20% cut.

Moorfield is also looking for locals to rally behind an Australian company rather than the US giant.

“We’re 100% Australia owned and we were built from the base up five years ago,” he says.

“For some people that will be an important differentiator.

“We’re running our own race and we’ll deliver a great service.”

GoCar will be taking on a company estimated to be worth $US62.5 billion, but Moorfield says other countries have shown that there’s room in the ridesharing market for local competitors.

“There’s a great opportunity in the market for a strong domestic competitor in ridesharing,” he says.

“There’s every reason to believe there are opportunities in the Australian market and we’re in prime position to capture them.

“We’re going to provide some much needed competition in the market. There’s room for two of us.”

More than 350,000 Australians have downloaded the GoCatch app, with 100,000 taxi bookings made through the platform each month. According to a Deloitte study, there have been more than 10 million UberX rides in Australia in the last two years.

The study also found that Uber provided $81 million of net benefits for consumers.

BRINGING THE DRIVERS ON BOARD

Despite operating in secrecy until now, Moorfield says GoCar already has a “really good base” of drivers signed on.

“It’s been challenging when you’re going under the radar but we put the word out there with existing ridesharing drivers and we now have a permanent driver’s centre so we’re starting to get more walk-ins,” he says.

Many of these drivers are existing Uber drivers, he says, who will either work for both services or jump ship completely. There is currently an estimated 13,000 Australian UberX drivers.

“Drivers will use multiple sources of work and there’s plenty of interest from existing Uber drivers,” Moorfield says.

Despite this intense switch of focus to the ridesharing market, he says GoCatch will still be working to help taxi drivers.

“We’re certainly not turning our back on taxis,” he says.

“There’ll be more work for them as it will attract more passengers to the platform.”

WAITING FOR THE REGULATORS

Initially GoCar will only be available in areas of Sydney including the inner west, eastern suburbs and CBD, but Moorfield says he hopes to expand to other areas once ridesharing is regulated.

“There’s a lot of momentum towards legalising it and we think there will be a domino effect,” he says.

Ridesharing was regulated and legalising by the NSW and ACT governments late last year, and Moorfield says this is what led GoCatch to create its own ridesharing function.

“That was the real catalyst – that was when we started having a serious look at rolling it out,” he says.

Moorfield admits it will take a while for GoCar to establish a foothold in the market.

“Like any online marketplace you need to drive both sides, so we’re asking people to be a bit patient as we build up the drivers,” he says.

“But it’s an exciting next step for the business. This is where the growth and investment in the point-to-point transport market really is.

“The passengers are going to love it and appreciate the choice. There’s room for two of us.”

“Last year we moved to legalise ridesharing services and it is pleasing to see new players such as GoCatch entering the market following that decision.”