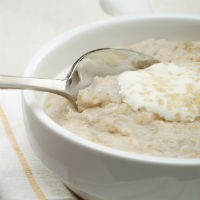 The company that makes Uncle Tobys Oats will modify a television ad after its claims the product was “naturally rich in protein” and a “superfood” were found to be misleading.

In the latest ruling on misleading advertisements by the Advertising Standards Board, it found parts of Cereal Partners Australia’s ad were misleading following a complaint about the ad’s “dishonest” claims about oats being a protein superfood.

The Uncle Tobys ad featured a family making up a bowl of oats in a breakfast setting while discussing the benefits of the breakfast’s protein content, including the comment: “Did you know Uncle Tobys Oats with milk are naturally rich in protein, which helps build muscles… and they’re a superfood”.

A qualifying screen super then appeared with the words: “A 40g serve of UNCLE TOBYS Oats with 2/3 cup of skim milk provides 11.1g of protein.”

An excerpt from the ASB ruling indicates the complainant checked the disclaimer on the commercial “only to realise that it only becomes a protein superfood if it’s consumed with milk”.

“According to the disclaimer that appeared at the bottom of the last shot on the TV ad, oats with milk contains 11.1g of protein,” the complainant’s submission reads.

“As a person who makes up their oats with water, and uses oats in baking, I thought that this was deceptive.”

The complainant also said they were struck by the use of the words “protein superfood”.

“To me, this implies that the oats are a superfood because of their protein content,” the complainant wrote.

“I believe in this commercial Uncle Tobys have gone out of their way to show oats as being high in protein and they are most definitely not.

“I found the commercial to be quite confusing, contradictory and deceitful, especially when you consider that you can’t assume everyone eats oats with milk.”

CPA defended the claims, saying the claims for the product being ‘naturally rich in protein’ were “clearly linked to the oats being made up with milk”.

“For those claims linked to the preparation of oats with skim milk, the basis of the claim is clearly depicted in the Advertisement through visual references, the voice-over and the onscreen super,” CPA says in a statement.

“We do not consider it reasonable to suggest that the product is ‘oversold’ because certain of the protein claims are not applicable to oats when consumed with water or in baking.”

In its determination, the ASB noted the complainant’s concern the advertisement referred to oats as ‘naturally rich in protein and a ‘superfood’ and said this was misleading.

“In assessing the current advertisement’s claim regarding the consumption of oats, the Board considered that the advertised product is a breakfast cereal and noted that while many consumers will prepare their oats with milk, in the Board’s view it is likely that some people prepare their oats with products other than milk, such as water,” it says.

The company says in the response it was never its intention to confuse messaging.

“Given our research indicated that the majority of consumers do prepare and consume their oats with skim milk, we felt this was the most appropriate way to communicate about the protein content.

“It is always important to CPA that we communicate clearly and accurately with consumers about our products and their nutritional benefits.”

Leah Bridge of Golden Goose marketing agency told SmartCompany she suspects the rise of “lifestyle diets” impacting the cereal company’s bottom line might have been behind the ad.

“Unfortunately in this case, as long as the majority of consumers aren’t aware of the misleading information, the brand will seemingly get away with it. It’s when consumers are alerted that they will begin to mistrust the brand,” she says.

“Businesses need to be aware of the golden rule when making brand decisions; just because you can, doesn’t mean you should.”

She says savvy consumers were not easily misled in today’s day and age, where consumers had access to a wealth of information at their fingertips.

“Counting on the fact that your consumer lacks intelligence is not a safe bet and is not a position a brand should find themselves in,” she says.