Why this Sydney entrepreneur said no to a $250,000 deal on Shark Tank

An Aussie founder who rejected a $200,000 offer on Shark Tank says he doesn’t regret the decision for a second, and a lot of important details were cut out from the show.

But while Disrupt Sports chief executive Gary Elphick was ultimately unsuccessful in the tank, he says it was still a rewarding and positive experience for himself and the company.

Elphick survived a “grilling” from the sharks on Sunday night after offering 5.8% equity in his customisable sportswear company in exchange for $200,000 in funding.

The prominent investors questioned the company’s revenue figures and its recent pivot to focus on the global market, with Elphick saying that out of $620,000 revenue for the 18 months before the episode was filmed (six months ago), only $151,000 came from the previous 12 months.

This led shark Janine Allis to claim Elphick was “taking the piss”.

“On what planet could you get to a $4.3 million valuation when you’re losing a lot of money?” the judge asked.

Four of the sharks eventually dropped out, but wished Elphick well with his lofty goals.

“You’ve got the stones to maybe pull this off. But it won’t be with my money.” 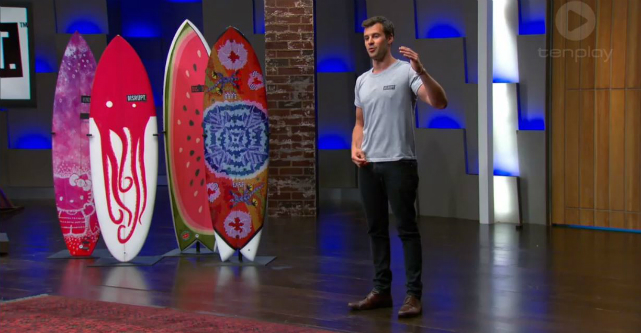 But another judge, Andrew Banks, bought into Elpqhick’s long-term vision for Disrupt Sports.

The judge offered the full amount of money but upped the equity stake to 33%, a number that proved to be far too high for the Sydney entrepreneur.

While a counter-offer was cut out of the televised show, Elphick says the startup was in the midst of a funding round and he was confident in his numbers and the valuation.

“We were lucky we had an offer but it just wasn’t going to fit in with where we were at,” Elphick tells StartupSmart.

“People say the sharks will add value but the investors and advisors we’ve got add so much value on a daily basis. I’d feel terrible if I prioritised people I’d only met for a few minutes over people that have been with us month in, month out.

“I was never going to take anything that was a stupid offer.”

Elphick says this ability to stand firm and not immediately accept money when it is thrown at you is crucial for other founders and entrepreneurs.

“It’s about knowing when to say no,” he says.

Disrupt Sports has endured a tumultuous six months since the Shark Tank episode was filmed, with its co-founder Chris Bailey deported by the Australia government after lying on visa forms about picking fruit for three months.

Despite the setback, Elphick says the company has enjoyed rapid growth since filming the episode, with the company beginning to make deals in the US and UK and expanding its team to 14 people.

And just last week the startup was selected by the government as one of the first participants in its $11.2 million landing pad program in Silicon Valley, with the founders scoring a spot in the RocketSpace incubator.

Despite lamenting how the episode was edited, with many of his finer moments left out, Elphick says Shark Tank was ultimately a rewarding experience, with two of the judges signing up as customers, and Steve Baxter is still in regularly contact.

“It was a really good learning and growing experience,” Elphick says.

“I can’t fault the experience – they were all really supportive afterwards. It’s just like an investor pitch, some will believe in your big and lofty vision and how you’ll get there, and some of them won’t.

“They’re just people asking questions. As long as you know your business inside out then that’s all that matters.”

And although the startup didn’t get the funding, he says the Disrupt Sports team still made an effort to celebrate the achievement.

“Regardless of how it was portrayed, we got our team together, shared a few bottles of wine and watched it.

“We really sat back and looked at the last 18 months and how far we’ve come. Consider that rather than rushing and enjoy the journey.”

Audacious, I wonder why he even approached the Sharks really, if it is already in place?