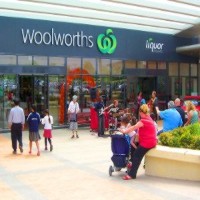 Investments in new digital offerings are starting to pay off for Australian retailers Woolworths, Myer and Dick Smith, according to analysis released this week by UBS.

The research, which draws on data from website traffic monitor Hitwise and retail figures from NAB, also shows local retailers are starting to claw back online market share from international retailers feeling the pinch of a falling Australian dollar.

Overall, UBS analyst Ben Gilbert told SmartCompany the online grocery market in Australia grew by 19% in 2013-14 and is estimated to account for around 2% of total grocery sales.

In the department store space, Gilbert says both Myer and David Jones are performing well, with the retailers benefiting from their continued investment in their online offers and a falling Australian currency, which is making international products relatively less attractive.

Just under 30 million shoppers visited the Myer online store in the last financial year, with website traffic growing by close to 200%. This compares to just over 20 million visits to the David Jones online store, which recorded a growth rate of slightly over 200% for the period.

Target and Big W are leading the way in website traffic in the discount department space, ahead of Kmart, with both retailers’ website traffic growing by approximately 125% last financial year.

“We were surprised by Target and Big W’s lead over Kmart, given Kmart has consistently outperformed its peers in terms of both sales and profitability,” says Gilbert.

“We believe this reflect Kmart’s focus on bricks and mortar, as Target and Big W look to other strategies to differentiate the offer.”

In home electronics, Dick Smith’s revival has helped it steal market share from competitor JB Hi-Fi, with Gilbert reporting year-on-year growth for Dick Smith website visits of 65%, while website traffic to JB Hi-Fi is down 10%. He says it appears Dick Smith’s increased visits “have been almost exclusively coming from JB”.

“This is a worrying trend for JB, particularly given the website is usually a good leading indicator for in-store sales,” says Gilbert.

“Australian retailers are executing better with their online strategies and taking share back from international retailers selling into Australia,” says Gilbert.

“The falling Australian dollar is negatively impacting international retailers selling into Australia with international online sales rising just 4% in the 12 months to July 2014, versus a two-year average of more than 17%.”

Overall UBS found the Australian online retail market grew by 11% in the 12 months ending July, which was double the rate of growth in the broader online market, and now makes up 6.6% of total retail sales.