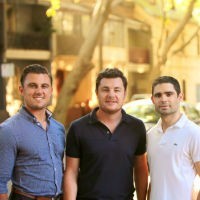 A Sydney startup is looking to make it easier for Australians to do their online shopping by providing an on-demand delivery service.

Sherpa describes itself as “everyone’s private courier” and is now available as an iOS app, with an Android version launching in the next fortnight.

Users are able to track their delivery in real time and communicate directly with their courier. Deliveries are completed within a few hours.

Co-founder Ben Nowlan told StartupSmart users can either get a Sherpa courier to pick something up for them and deliver it to wherever they are – whether it be a package from a store or their keys which they left at home – or arrange for them to make the purchase and then deliver the item to them.

The startup launched last November and Nowlan says the last three months have been very encouraging.

“Everything we’ve done up till now is about micro-results,” he says.

“We are on track to be doing 200 deliveries a week by the middle to end of February, which is fantastic. That’s coming through law firms, real estate agents, individuals and now a big influx of e-commerce sites.”

Nowlan says the startup is currently in the process of taking on a six-figure seed investment in order to hire more couriers and scale the business to other cities around Australia. For the moment, Sherpa only services the Sydney CBD and inner suburbs.

“We just have to manage that supply and demand where you have enough demand for the Sherpas to keep them busy,” he says.

“Outside of that the only other obstacles we face over the next three to six months is ensuring we get the capital to fund our growth because that will be the only thing to stop us.”

Nowlan says consumers are increasingly expecting same-day delivery and the least amount of friction when it comes to buying online as possible.

“Five years ago it was one of those problems people didn’t know you had because you accepted the status quo – that Australia Post is either going to lose your parcel or it’s going to turn up in four to five days,” he says.

“Why sales are still holding a fair bit offline is really the experience of customers wanting it now. Services such as Uber and Airbnb show by enabling technology in existing infrastructure, you can make the experience so much better.”