“We can’t wait”: Family business without answers as NSW border rules cut them off from cattle 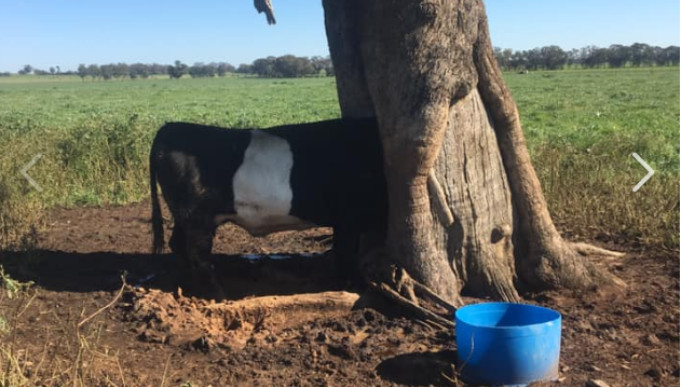 Luckily this tree was on the right side of the border. Source: supplied.

NSW-based farmer Jason Singe was checking on his cattle yesterday when he noticed one “not particularly smart” member of the herd stuck headfirst in the base of a nearby tree.

Luckily, some skilful chainsaw work soon freed the animal, but had it been a resident of the family’s neighbouring farm across the Victorian border, there would have been a much less happy ending.

That’s because as residents of Ryan, NSW the Singe family are currently unable to access cattle on their second property in Victoria’s Tallangatta Valley.

Under new tough border restrictions over the NSW/Victorian border, a typical three-hour round trip would turn into a two-week nightmare; forcing them to drive through Melbourne after visting the Tallangatta property, purchase a plane ticket to Sydney, and then quarantine for 14 days at their own expense — all before driving back to their NSW farm in a hire car.

Cathryn Singe, who works alongside her husband, says authorities are essentially asking them to turn a rather low-risk trip to their Victorian farm into a foray through Australia’s biggest coronavirus hotspot.

“We would have sold 45-50 heffers next week, but we can’t put them into market because we can’t get to them,” Cathryn tells SmartCompany.

Both of the Singe family farms sit just outside of border zones drawn up by the NSW government amid a tightening of border rules in recent weeks due to a second wave of coronavirus infections across Melbourne.

While communities residing within the border zones are allowed to cross the border with permits and are not required to quarantine in Sydney afterwards, those who’ve fallen outside the lines aren’t so lucky.

For the Singe family, which purchased the Victorian property to hedge their bets against harsh drought conditions several years ago, the restrictions are compounding their financial pains, already exacerbated by the bushfire crisis in January.

“I respect the fact they’ve got to draw a line somewhere, but they’re not recognising how diverse agriculture is,” Cathryn says.

“Our cashflow has already been poor because of the drought, we had planned to bring forward our sale from September to now.”

The Victorian farm accounts for a third of the family’s income and is an asset worth one million dollars for the business.

The dilemma underscores how the raft of hastily put together rules to curb the spread of coronavirus are seeing some small businesses fall through the cracks, particularly in cases where individual circumstances generate adverse outcomes.

In past weeks, before the requirement to quarantine in Sydney was handed down, the family was able to cross the border with a permit and then self-isolate on their farm when they returned.

But last Friday, in an abrupt change, the NSW government moved to force all residents outside border zones to quarantine in Sydney on their return, leaving Cathryn worried about the welfare of their Victorian animals.

The Singe family’s previous permits were cancelled, and when they went to obtain new ones, they learned their Ryan, NSW property was located a 30-minute drive outside the border zone.

While the Tallangatta Valley property is listed in a second “border region” classification by the NSW government, official advice suggests critical worker permits for travelling to these areas is only available to residents who live in a border region, and the family’s Ryan, NSW property is not in an accepted postcode.

The two separate sets of border area classifications has caused confusion, and Cathryn has spent the better part of the last week contacting various politicians and Services NSW about their case.

Cathryn says she’s yet to get a concrete answer from the government about whether case-by-case exemptions are available.

“I’m expecting these border restrictions to last until March next year … we can’t wait that long,” Cathryn says.

Cathryn says she supports the border restrictions in general, but would like to see the state government do a better job of helping individuals secure case-by-case consideration where following the rules could even increase their risk of contracting the virus, or put their livestock at unnecessary risk.

In a statement, a Department of Customer Service spokesperson said appeals or requests for “interpretation” of the border rules are handled on a case-by-case basis.

“The NSW government apologises for the frustration and disappointment for people who are not currently eligible for cross the border into NSW,” the spokesperson said.

“The border permits reflect the ongoing outbreak of COVID-19 in Victoria and the need to minimise the risk of transmission into NSW.”