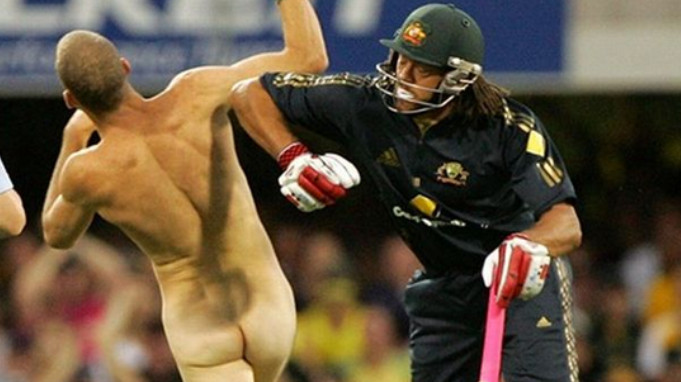 At 3/34, Symonds had bigger things to worry about.

It was intended as a homage to an infamous moment in Australian cricket history, but ahm insurance has pulled an advertisement featuring Australian cricketing legend Andrew Symonds from the airwaves, after a slew of complaints it was inappropriate for television screens.

In a decision that’s already courting controversy in cricketing circles, the Ad Standards Board has heaped criticism on ahm insurance for a marketing campaign featuring Symonds hip-and-shouldering a production assistant, before promoting the company’s chiropractor cover.

The ad, a reference to a 2008 incident in which Symonds ⁠— at the crease trying to revive a disastrous 3/34 run chase for Australia⁠ — decked a streaker who had run onto the Gabba pitch in Queensland.

But ahm has now pulled the ad over complaints it made fun of “assault in the workplace”.

“The advert where Andrew Symonds shoulders the young guy just trying to do his job in his workplace is disappointing,” a complaint spotlighted by the Ad Standards board reads.

“Understand this relates to an incident in cricket history somewhere, but seriously in 2019 do they really think the target market for private health insurance thinks this is funny?”

The 30-second video is one of several ads Symonds shot for ahm insurance in a campaign that’s been running since at least last October.

The majority of the Ad Standards panel broadly agreed with the complaints, saying the ad constituted a depiction of violence which was “not justifiable in the context of the product or service advertised”.

“The majority of the Panel considered that the depiction does not show a resolution to the situation and that the viewer is therefore left with an impression of harm,” the Ad Standards Board said.

“The majority of the Panel considered that the depiction of purposefully and unapologetically injuring someone was not justifiable in the context of advertising flexible health insurance cover.”

The Ad Standards Board, an industry-based initiative which presides over several industry-based advertising ethics codes, does not have the power to pull advertisements from the airwaves.

However, ahm insurance said it had decided to pull the ad from its own campaign on January 13, after receiving complaints directly.

“In response to the number of complaints, ahm has made a decision to remove the advertisement in question from its current media buy, effective immediately,” ahm insurance said.