I have fucking had it with governments’ fawning worship of tradies.

Watch their announcements and you would believe there is literally no other industry in Australia. So tradies are showered in subsidies despite being, just let me check, one of the least COVID-19-affected sectors in the country.

What the hell Village People dress-up recovery policy is this?

Tradie friends say they’ve never been so busy, even earlier in the year before any subsidies.

So yeah, while other industries face extinction, let’s shovel some more money at them.

To subsidise work they’re too busy to get to at the moment, mate.

Governments have made the hi-vis vest a visual shorthand for ‘real’ work. There’s a strong message that jobs that involve thinking, teaching, caring, helping or creating aren’t real work.

In 2020, Australian governments think proper jobs look like this:

(I watched a stack of period VB ads and counted the number of women and non-white guys doing a hard day’s work. That number was zero.)

You know tradie-worship is widespread when the first job mentioned in the arts rescue package announcement is “sparkies”. Or when the top criterion for picking stimulus projects is being “shovel-ready”.

Tradie worship pervades everything. I watched a TV news announcement about jobs, and what’s the screen graphic? A toolbox full of spanners and hammers. There’s your future, kids.

And this comes right at a time when COVID-19-fuelled economic outcomes are hitting women far harder than men.

In Blokesworld Australia, if you don’t drive a jacked-up twin cab ute, you have no value.

This from a recent Prime Ministerial speech about digital policy:

“We’ve just got to be the best at adopting. Taking it on board. Making it work for us. And we’re really good at that. You don’t have to be a tech-head. You don’t have to be someone who was totally absorbed in the technology of this to understand its implications. It’s a massive priority for my government.”

You don’t have to be a tech-head. Man up, code tradies, let’s renovate some innovations from overseas!

Sure, tech has created the greatest wealth explosion the world has ever seen. But no need for those nerd skills if you’re happy for Australia to remain a dumb-ass quarry and Project Home World forever. It’s all good mate!

Why would you acknowledge our tech global achievers, such as Atlassian, when all those guys do is use that money to stir up opposition to dinkum Aussie coal?

Australian innovation policy is a white paper adaption of an 80s jocks-versus-nerds movie.

What do we get for our money?

This is not a personal vendetta against tradies themselves. They generally work hard. So do the rest of us.

That’s if we’re lucky enough to have work, at this point.

But let’s consider what we get for our tax dollar investment. Where does breakthrough innovation come from? The kind that boosts productivity and puts us ahead as a nation.

It comes from driven people on a mission. Who are determined to find better ways to do things. Who have big ideas they’re desperate to take to the world.

Those people are working around the clock.

Tradies knock off on time every day of their lives. They’re in no way pushing back the boundaries of what’s possible. Why should they bother? They’re never short of work.

Thanks to decades of tax policy from both sides of politics that subsidises housing, until our two biggest cities are in the top five most expensive housing cities in the world.

Tradies are a modest 9% of our workforce. Number four on that list. 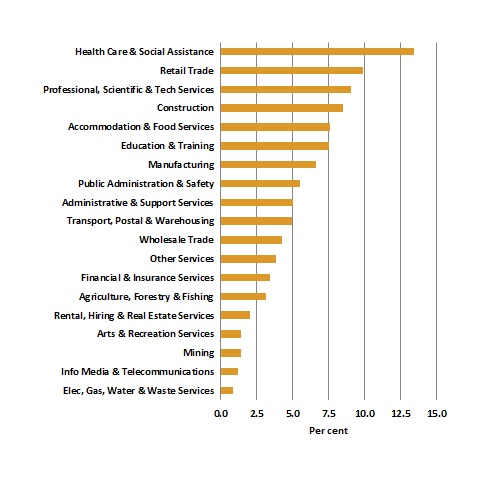 Why do they deserve government cash more than the other 91%? Particularly when tradies seem to be running at full capacity anyway.

Is it because governments just like man smell? There’s now tradie shower gel in both Lager and Pilsner scent, packaged in a takeaway twin pack of fake beer bottles.

If someone isn’t already writing a thesis about Australia’s endless fetishization of the tradie in the Morrison era, then they should be: pic.twitter.com/1QHs58ZmC1

Enough of soft-hands government-types trying to get some reflected macho man glory from putting on the hard hat and ‘rolling our sleeves up’.

We see your cosplay agenda for what it is.

The cost of essential goods and services is rising “more rapidly” than the price of non-essential items: ABS

“Tradies knock off on time every day of their lives.”

Massive giveaway that the writer of this article clearly has no idea about the industry.

Before the writer criticizes the industry, they should go and work a labour job in the construction industry (which is practically like working a trade) for a few weeks or a month and see how they fair.

You work longer hours but you get so much $$$$$$$$$$$$$$. and those hours you work are you just messing around and not doing your job.