Women working on construction sites across Australia are often not provided with somewhere to go to the toilet, and regularly need to leave their workplace to find appropriate amenities.

This is especially true in the electrical trade, where women’s amenities are not only often not provided but even treated as an inconvenience by employers.

A report released by the Electrical Trades Union on Thursday said it’s a big problem that impedes women from working in male dominated occupations like trades. The union is launching a campaign to make women’s amenities mandatory on all worksites.

Currently, women make up just 2% of electrical industry in Australia.

Sarah Brunton, a Darwin-based electrician with more than 20 years’ experience in the trade, said women’s toilets are overlooked on smaller sites, all the way through to large, major projects.

“If you’re on a smaller job, it might look like going home, or going down to the local shopping centre, or Macca’s or the servo, to duck in and go to the toilet,” Brunton told Women’s Agenda.

“You often miss out on time to rest and enjoy smoko.”

Brunton recalled working on a large mine site, where the only place for women to go to the bathroom was in the admin office, 7 km away from where she was working.

“Women’s toilets are overlooked to the point where there’ll be men’s facilities in all the appropriate areas on site, but as a female, you’ll have to get in a ute, or walk back to a designated area where the closest female toilets are,” she said.

“You can imagine how much time gets wasted.” 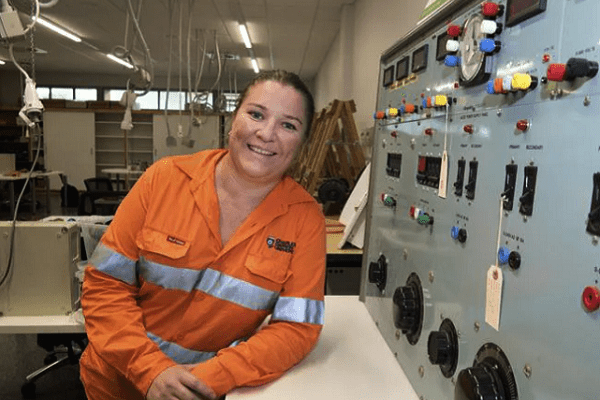 During her time in the industry, Brunton says she’s seen the lack of facilities for women become a massive issue, and it prevents women who may be thinking about starting a trade from doing so.

“I think it can be one of the reasons women leave their apprenticeships and don’t hang around in trades. Not having somewhere safe to go to the toilet during the work day inhibits a lot of people wanting to be in that workplace,” she said.

“In 2021, you would expect that employers would automatically provide facilities for women, given that we make up about half of the population. They are still just not thinking about it, and just overlooking it in a lot of cases.”

National Secretary of the Electrical Trades Union Allen Hicks said there should be minimum requirements for worksites to ensure amenities for women are provided, regularly serviced, and accessible. A lack of appropriate facilities for contributes to workplace cultures that sideline women and their needs.

“This has forced women to take drastic action, risking their own health, safety and hygiene through practices like drinking less water or deliberately delaying their menstrual cycles,” he said.

“Women face major barriers when attempting to address these issues, through the prevailing stereotypes and myths about women in male dominated workplaces.

“This contributes to workplace cultures that are non-inclusive and historically masculine with a tolerance of inappropriate behaviours including bullying, aggression and the objectification of women.”

We need more women in tech. Addressing the inherent “bro culture” is a good place to start

Recruitment specialist Nicola Steel says its tech's pervasive environment, which can manifest as overt or unconscious, that is causing women to leave the industry.

Brooke Farris has been appointed CEO of Rip Curl, becoming the first woman to head up the global surf company in its 52-year history.