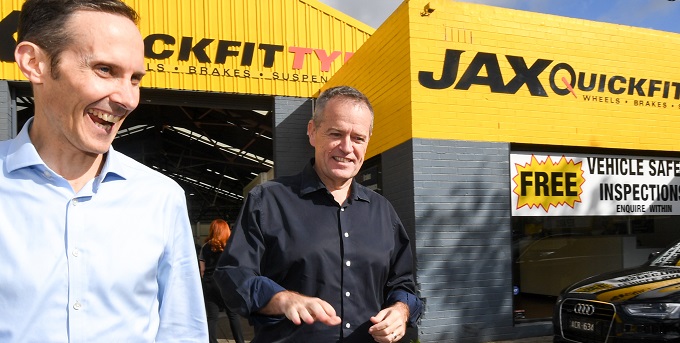 Sub-contractors working on “large Commonwealth construction projects” will have a guarded piggy bank protecting them from going unpaid due to dodgy insolvencies if Labor wins the next election.

In his latest policy pitch to small business ahead of the election later this year, Opposition Leader Bill Shorten said sub-contractors are being “ripped off” by construction companies going bust without paying their bills.

Illegal phoenixing activity is rife in the sector, leaving independent subbies out of pocket in what was dubbed as a “systemic issue” by the Australian Small Business and Family Enterprise Ombudsman last year.

Labor wants to force contractors on large Commonwealth projects to bank taxpayer funds through cascading statutory trusts, which ensure money payable to sub-contractors is reserved rather than distributed to other secured creditors in the event of an insolvency.

While Labor initially plans to use trusts only on federal government projects, Shadow Assistant Treasurer Andrew Leigh says they want to expand the scheme to the entire industry, including commercial projects, if elected.

Leigh says Labor will call a Council of Australian Governments (COAG) meeting “as quickly as possible” if elected to discuss how state governments could utilise cascading trusts in their own projects.

“When people get ripped off that doesn’t just damage that particular commercial relationship, it damages the next one too,” Leigh says.

Leigh says there’s no “fixed figure” for how large a Commonwealth project would need to be to qualify for the pay guarantee and there’s also no specific floor for the value of a sub-contract.

“We don’t have a fixed figure in mind, we’re looking at rolling it out to as many subbies as possible,” Leigh says.

Labor will also create a $7 million “Tradie Litigation Fund” to finance access to justice for sub-contractors, enabling ASIC to better pursue dodgy firms through the courts.

“Not only will this give tradies their day in court, it will also act both as a punishment and deterrent for dodgy directors,” Shorten said in a statement circulated on Tuesday.

“People who deliberately burn their companies should be subject to the full consequences of failing directors’ duties, including being liable for compensation, fines of up to $200,000 or five years behind bars.”

The use of cascading trusts to address construction-sector insolvency has been recommended by ASBFEO and the Murray Review of Security Payments Laws.

“In the past few years, there has been a marked increase in Australian construction industry insolvencies and small-business subcontractors are the hardest hit when this happens,” Carnell said in a statement.

“Subcontractors perform more than 80% of all work in the Australian construction industry and small businesses with less than five employees make up 64% of all construction sector.”

Carnell released a working paper on the use of trusts in the sector in November last year,  also supporting extending their use to commercial projects.

Politicians across the country are making announcements aimed at tackling illegal phoenixing activity, an issue estimated to cost Australia’s economy up to $5.1 billion annually.

Queensland’s LNP opposition said yesterday it will establish a commission of inquiry into the issue if it wins the next election.

Labor wants to move on many of the recommendations outlined in last year’s Murray review and will use its first COAG meeting, if elected, to discuss their implementation with the states.

This will include consulting on a possible referral of powers to a federal program Labor wants to set up which would establish a legislative regime to work through the implications of the review.

Leigh says Labor is “open” to other suggestions which wouldn’t involve states referring power to a federal body though.

The federal government has been supportive of a crackdown on phoenixing activity too, and is implementing director ID laws, a recommendation made by the Black Economy Taskforce.