ShelterSpace founder Paul Mitchell has been designing and building earth sheltered homes for 40 years, but his firm’s workload has doubled following the bushfires that tore across Australia.

“Probably half [of our nine current projects] have had their houses burnt recently,” Mitchell said.

ShelterSpace is a design firm based in Adelaide that specialises in building structures wedged into their natural surroundings, also known as earth-sheltered homes.

Over four decades the company has completed 50 earth-sheltered projects, almost all of which are 95% bushfire proof and use little heating and cooling resources. 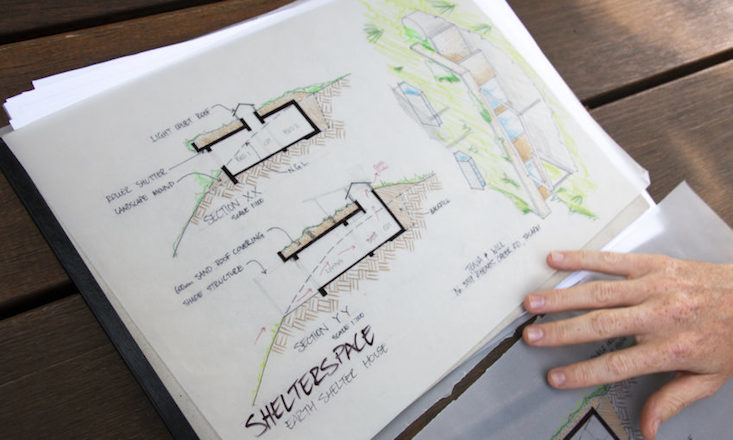 The impact of Australia’s recent summer of bushfires has led to homeowners, as well as interstate councils, enquiring about commissioning structures from ShelterSpace.

Mitchell’s associate Dale Lloyd said the fires have made councils and homeowners realise that certain housing solutions are not sustainable.

“I think a lot of people are definitely more open to alternative building solutions,” Lloyd said.

“What we would love to see is these little nodes of communities that live in the Adelaide Hills or the Blue Mountains areas of Sydney, and each little individual satellite town can have an earth-sheltered community building, so that people who can’t afford to build one still have access to one in the case of [a] fire event.”

Mitchell has been at the forefront of the Australian earth-sheltered home movement since the mid-1970s and presented a paper at the first International Conference on Earth-Sheltered Buildings in Sydney in 1983.

He constructed this type of home for his family on the Murray River in 1979 after realising how much cooler it was in underground bunkers while enlisted for national service in the Royal Australian Engineers.

“I didn’t know what I had done, to be perfectly bloody frank and honest with you,” Mitchell said.

“A friend of mine who was in a band I was playing in, he was an architect, said: ‘You know what you’ve done? You’ve built yourself an earth-covered house’.”

Earth-sheltered homes have been praised for their ability to regulate temperature efficiently and withstand extreme weather conditions.

Mitchell said that his homes are “almost completely” bushfire resistant because they are sealed off from the elements.

“There’s no way a spark can get into the roof, as there is no roof space,” Mitchell said.

“Normal brick veneer, tiled roof, tinned-roof houses go up in flames because a spark gets into the roof space.

“If you can eliminate 95%, you’re left with 5% chance of it going up, and that’s if the windows break, so you put roller shutters on and then you’ve done it.”

His homes also are built with external exposed walls made from non-combustible materials and meet the highest level of the Building Code of Australia’s Bushfire Attack Level regulations.

They also come with an entry airlock – a small space between the door and the rest of the house – which minimises the risk of embers entering the house, and also helps to maintain the interior temperature by letting less outside air in.

“People see the bush being destroyed and say, ‘I want to live there, but I want to do it safely’,” Mitchell said.

“It’s not a big leap. But once the people make the leap, it all falls into place.”

This article was first published by The Lead. Read the original here.